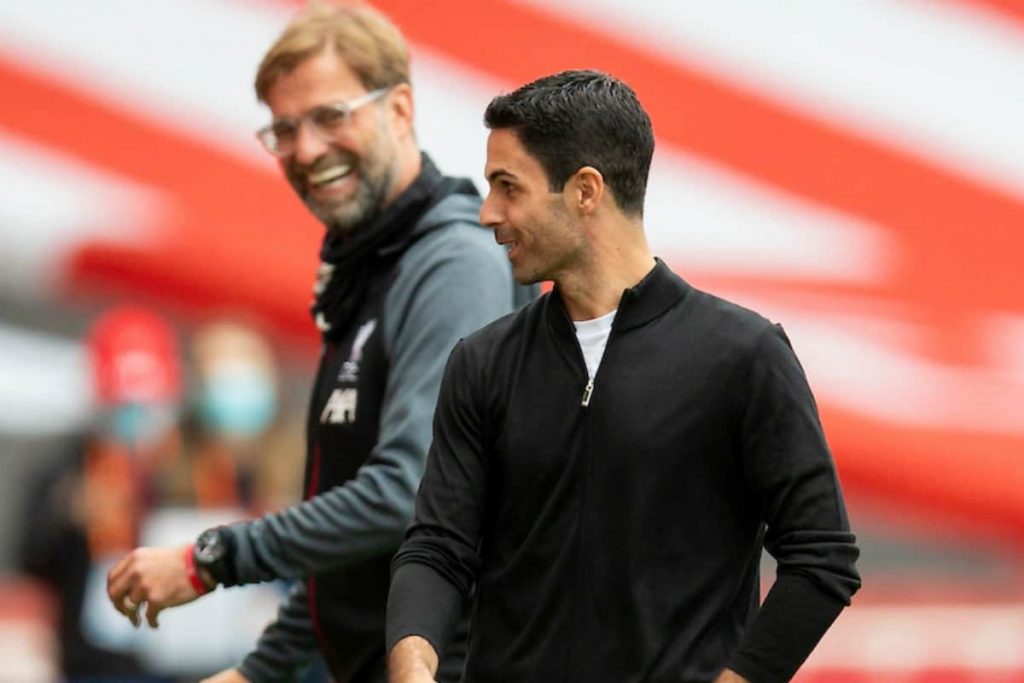 With the Premier League back this weekend, Liverpool will be entering it with a happy face as their players have not suffered any injuries during the international as they face Arsenal on Saturday, who cannot say the same thing about their squad with the Gunners suffering multiple injuries during the break.

Jurgen Klopp and Liverpool have a tough run of fixtures ahead of them as they face Arsenal and Real Madrid in the space of 4 days and with the Top 4 race still in touch, Klopp will need to evaluate the strength of his team before he goes into the weekend game.

Klopp will be buoyed going into this match as Roberto Firmino is likely to be in contention for the game and it is the first time in more than 6 months when Klopp will have his 4 main strikers available and fit to play and the timing couldn’t be better. With Klopp hoping to mount a Top 4 race and keep his hopes in the Champions League alive, Klopp’s injury list is shortening.

While none of Liverpool’s main center-backs are available for the game against the Gunners, having Fabinho back at the base of the midfield has given the likes of Ozan Kabak and Nathaniel Philipps a lot more confidence and Liverpool look energized for games again. Thiago can now influence the game the way Klopp would have always wanted the Spaniard to and Wijnaldum wanders into the attacking zones with freedom again. With Real Madrid on the horizon, Curtis Jones might play instead of Thiago or Wijnaldum on the weekend.

Up-front, the likes of Jota, Salah, and Mane might continue to feature for the Reds. While Firmino might be in contention for the game, it is highly unlikely that the Brazilian will start the game, however, he could play a key role off the bench for the visitors.

When Liverpool hosted Arsenal earlier in the season, albeit the Reds were in impeccable form, they battered Arteta’s men 3-1 and Klopp will be hoping his side can pull off some form from early in the season.

Does the question seem idiotic? Yes. Is it possible? Very much so. Jurgen Klopp has not aced his tactics this season as his gegenpressing ways have finally caught up to his team, evidenced by the number of injuries they have suffered this season. Arteta has proved that he can play teams off the pitch this season as he did so against Mourinho, Lampard, and Solskjaer this season. Klopp might be better than these managers, but he is currently below Chelsea and Machester United in the table, and Arteta will look to weed out Liverpool’s issues and counter-attack them.

Arsenal will mostly be missing their breakout stars this season in Buakyo Saka and Emile Smith-Rowe for the game on the weekend as Saka has been training individually due to his injury during the international while Emile Smith-Rowe suffered a hip problem while on duty with the England U-21’s.

Although Arsenal faces a Europa League quarter-final tie in midweek, Arteta will be putting out his strongest XI against Klopp’s men. The backline will continue to feature David Luiz, Kieran Tierney, Hector Bellerin, and Gabriel Magalhaes as it has done so in recent Premier League games. Thomas Partey will be in the double pivot with Granit Xhaka, who have now formed a great understanding between the two of them.

Upfront- the likes of Nicolas Pepe, Martin Odegaard, and Aubameyang might feature behind Alexandre Lacazette, somebody who has rekindled his form in recent games.

Mikel Arteta has the tactics and the brain to pull this off but it is his team who will have to perform on the weekend and show some fight in the race for a Europa League position for next season.

Leeds United vs Sheffield United: Preview | EPL 2020/21
Independiente move not on the cards for Sergio Aguero
To Top