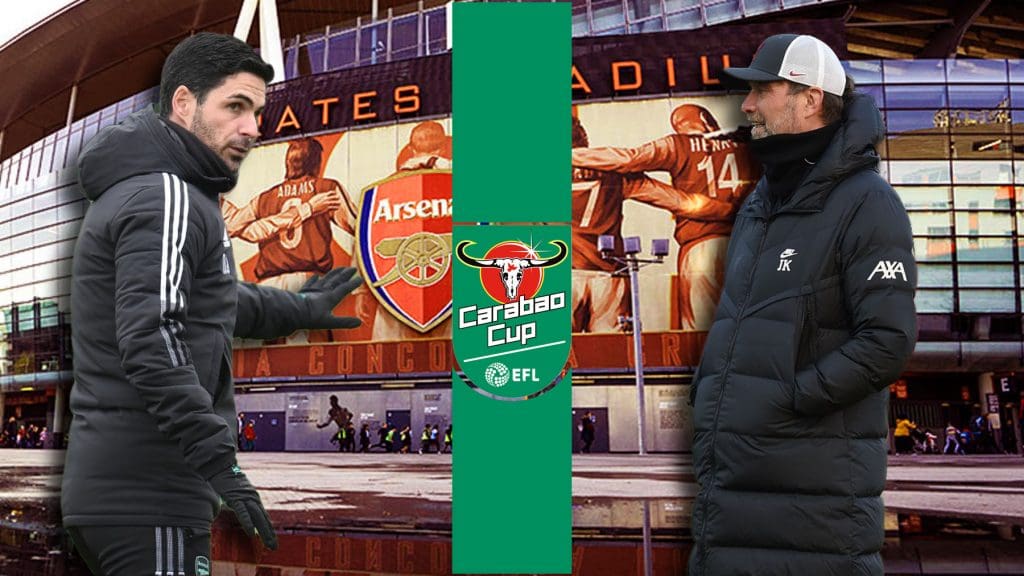 The 1st Leg of the Carabao Cup ended in a bit of a disappointment for the Reds. As the X men Gunners labored them to a draw, at Anfield.

However joyous it might be for Mikel Arteta and company, they understand the task at hand. When the two sides face each other on Thursday, at the Emirates. Although, both the teams shared the spoils in the 1st Leg, but the mangers of each side know the dynamics of the game. It has to be an interesting battle between two of the most reputed teams in the world football.

Liverpool’s dependency on the flank

Being unable to score against the sides who set-up defensively. Depending on the consistent accurate crosses from the full backs, every single time. No creativity in the midfield. Have cost the Reds big time now. And the 1st Leg against the gunners was a recent spectacle to that.

In theory, a decent team with 11 players tends to dominate the team with 9 or 10 players. But Klopp’s men have struggled, mainly since the last season. Where they were left with 19 defensive make shifts through the course of the last season. Unfortunately, the crisis did not end any sooner. Klopp did not have most of his players for a longer period of time. The only defensive player to play most of their games last season was Robertson. Highlighting the squad’s serious weaknesses.

So, Klopp resort to the system- where either of the full backs puts their crosses in when they get even the slightest of opportunity. It worked out to be a great success. This season, like all the previous seasons, has been a live example of the system in which the Klopp’s Teams work. The only difference now is that the attack lacks the same pace that it used to have back in the day when Klopp arrived. No one can do anything about this. Except, a change in the tactics is required.

Where other teams in the same league, like Manchester City, Chelsea, etc. make their plays from the middle. Liverpool are lagging behind with their tactics, and plays from flanks. If you look at the current Liverpool squad, Thiago is the only one who possess creative skillset. But he is too injury prone. Jurgen Klopp and the Board needs to sit down and discuss the issue before it is too late.

Gunners looking strong on the counter

On the contrary, Arsenal under Mikel Arteta are developing a system where they sit back and hit on the counters using the pace of their speedy midfielders and attackers using a compact defence when they can’t dictate the play as per their yearning. Since Arsene Wenger’s departure, they have not looked in a much better shape then they have been so far this season. It has been clear that Arsenal are focusing on the young players, and building a squad that is sustainable. In hindsight this strategy is foolproof. The only thing is the club and supporters backing, which Arteta has got in abundance.

If we go back and take a look at how the Gunners started their season. There were a lot of problems, but the team addressed them all in a pretty quick time. They have adapted to a system where a dynamic full back like Tierney provides that extra support in the attack, and the team generally rely on the pass and move from the back. With the conventional man-to-man marking Arsenal give their oppositions no chance but to take shots from outside of the box giving a less chance of a threat to their goal.

Despite all of these changes Arteta has a still long way to go. And Arsenal have long way before they can start reliving those merrier old days back again. Teams like Liverpool or Manchester City who play with higher defensive back line gets benefitted from this more often than not. Opening the defense through the thread passes, and scoring. It all becomes an art. But when your opposition themselves are struggling then you are in for a treat. And that is why as the underdogs, Arsenal, have a chance to steal the victory from their “more favored” opponents.

The young English winger has been a Beast in the making. He has been very adventurous up front for Arsenal’s progress under Arteta. Saka was the main man for the gunners at Anfield, in the 1st Leg. Outpacing midfielders and the defenses. Making perfectly timed run behind the Defense. Saka proved to be a trouble maker for the Klopp’s men. Likewise, Arteta will be eyeing for another performance like this from his young baller.

On the other hand, The Reds will once again be relying on their more experienced Scottish left back to shut out the crosses coming in the box from the right hand side. It has been over a 4 years since Robertson was bought from Hull City.  Making his way to the playing XI is one thing. Maintaining to a level that now it’s undisputable, is another. It will be interesting to see who is going to triumph- Will it be the young sensation or the man who is one of the best in the World in his position?

Since Salah and Mane left for the AFCON, all the responsibility has been put on the shoulders of the Portuguese Striker, Jota. Klopp has been all praises for the striker since his move here to the Merseyside from Wolves. And rightly so! Diogo Jota has been in the thick of scoring goals for Liverpool this season, scoring 12 goals in just 26 games. He will surely be looking to add on to this tally, on Thursday. Alongside the veteran Brazilian Bobby Firmino Klopp will be hoping for these two to make a difficult outing for the home side.

Meanwhile, Arteta will be hoping that his $70 million Defender, Ben White, can stand up top to the the Liverpool’s attacking threats. A key player in the defense for The Gunners this season. White blocked all the goal for the opportunities for his opposition when the two sides faced each other in the 1st leg. The Arsenal faithful will be hoping for another solid performance from their expensive defender, if they have any chance of making it to the final.

Arteta must still be fuming with Xhaka for that silly tackle in the reverse leg earlier this month. Given the current state of the Arsenal squad, you don’t want your experienced players to be sent off for silly challenges. For the gunners the test is upcoming. As Bukayo Saka, Emile Smith Rowe, Tomiyasu, Cedric Soares and Calum Chambers all of the key players are minor doubts due to Knocks and/or fatigues. Arteta struggled without the likes of in form Odegaard (ruled out due to COVID) and Smith Rowe.

With Partey and Elneny still out for the AFCON, Lokonga will again have to step up his game in the midfield. And Arteta will be hoping for a stability in the defense like in the 1st leg, provided by none other than the star man Ben White.

As usual, the prolific pair of Liverpool seal the major talking point before another Major fixture. Not long gone for the AFCON, but Salah and Mane have certainly been missed by the Merseyside outfit. Although, no excuses can be made. Klopp challenges the rest of the squad to move on from it and live up to the team’s reputation. While Thiago, Elliott and Philips all remain out due to their injuries. There have been no other significant injuries in the squad to deal with.

A major boost though for Klopp and company is that their unsung Cup hero, Divock Origi, has been back in the training. We might not be expecting any major changes in the lineup of the Reds from what we saw in their victory over Brentford, over the weekend. With the full squad at hand, Liverpool are undoubtedly the favorites to face The Blues’  in the final of this year’s EFL Cup.

Egypt vs Sudan: Match Preview | AFCON 2021
Why Sergino Dest can actually flourish at Chelsea?
To Top