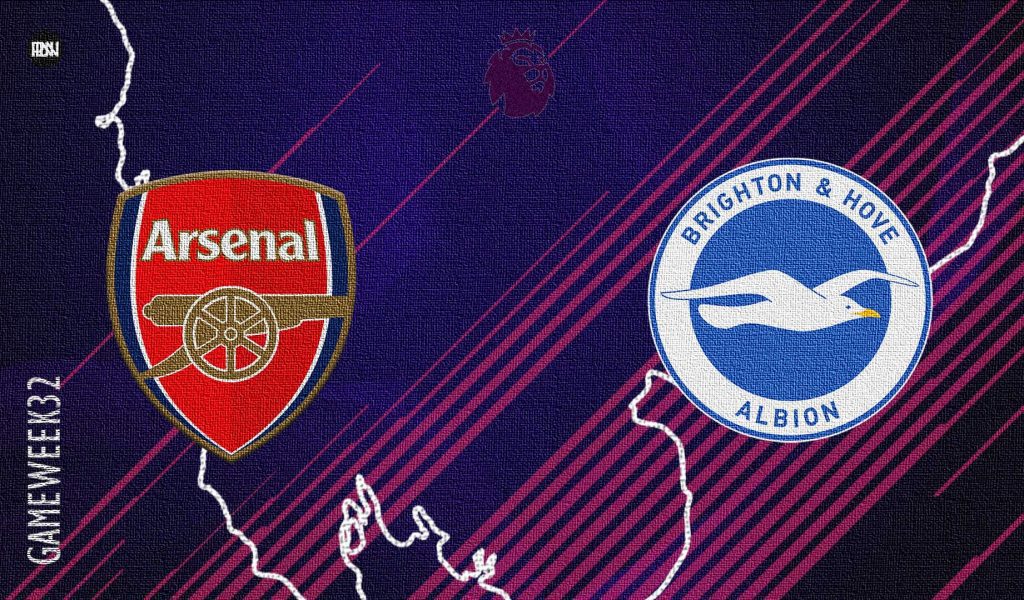 Arsenal and Brighton and Hove Albion face off this weekend, in what is set to be huge game for the hosts, as the race for the 4th place heats up.

Arsenal were battered and bruised in their last game against Crystal Palace when they lost 3-0 at Selhurst Park. The loss came as a surprise to the Gunners who have had a very good last few months, and it was a huge blow for them in the race for a top 4 spot. Arsenal sits 5th now, level on points with Tottenham Hotspurs in 4th, having played a game less. However, they have Manchester United and West Ham United breathing down their necks, and any slip up between now and the end of the season will prove to be very costly. The loss at Selhurst Park meant that Arsenal have now lost two out of their last three games, conceding 5 and scoring just one in three games. It certainly threw a spanner in the works for them, after the Londoners had gone on a brilliant 5 game-winning run. They are the favourites to get the 4th spot with their rivals all struggling at the moment. However, with just 9 games left to play it is still very close to call and it will undoubtedly be going down to the wire. Mikel Arteta has received a lot of praise for the way Arsenal has been playing lately and it seems the Gunners have turned a corner since their beginning of the season struggles. They now face Brighton and Hove Albion who have themselves been winless since mid-February.

Brighton and Hove Albion are on a very miserable run of form, with no wins in 8 games. They have lost all but one out of them, only drawing against Norwich City last weekend. Their attacking woes have also resurfaced, scoring just one goal in 8 games, and manager Graham Potter looks at a loss currently. He will need to shake things up a bit to get out of the rut that the Seagulls are stuck in, and a positive result against Arsenal away from home would be the best way to go about it. Brighton sits 13th as of now, 10 points clear of the relegation zone, and in no immediate danger. They looked set for a top-half finish early in the season, but their form has trailed off since. However, they are still in the mix for a top-half finish in the league table with Crystal Palace in 9th and Leicester City in 10th just 3 points away. It will be interesting to see if Potter can do some magic to help the Seagulls in this last part of the season.

Arsenal have a few players on the injured list ahead of Saturday afternoon’s game. Left-back and Scotland international Kieran Tierney is set to miss the remainder of the season with a knee injury, and he will undergo a surgery in the coming weeks. Summer signing Takehiro Tomiyasu is set to miss at least two more games and has been ruled out of the contest against Brighton and Hove Albion. Defensive midfielder Thomas Partey is a huge doubt for Saturday. Nicolas Pepe missed out on the defeat against Crystal Palace on Monday with an illness and he will be expected back in contention against Brighton.

Brighton and Hove Albion’s Jakub Moder suffered an ACL rupture against Norwich, only a few minutes after coming on as a sub, and has definitely been ruled out against the Gunners. He remains the only Seagull player to be on the injured list, with Adam Webster facing a fitness test ahead of their trip to the capital. Graham Potter will have an otherwise fit squad on Saturday and will be hoping for a positive result away from home.

Brighton and Hove Albion had problems in front of goal last season, which was a big talking point as they entered this season. After a few games at the start of the 21/22 season, it seemed the Seagulls had put those troubles behind them, with their attackers and especially Neal Maupay firing again. However, it was not to be as the ghosts of the past returned to haunt them, which has now led to this very poor run of just 1 goal in the last 7 league games. The team has not created enough chances and they seem to lack the imagination and motivation to score goals, which was evident by last weekend’s 0-0 draw against one of the league’s worst defences in Norwich City.

On Saturday they face one of the most organized defences in the league. All the problems that Arsenal had with their defence at the start of the season have vanished and they now look very strong on paper and on the pitch. However, if Monday night was anything to go by, Arsenal still have a lot to improve. Nuno Tavares at left-back had a torrid time against Palace and was substituted early on as a result. The whole defence was tormented by the likes of Wilfried Zaha and their defence split open.

While Graham Potter does not possess the same individual threat that Crystal Palace does, he has worked wonders before with this team. Arsenal and Brighton are equal in their head-to-head records with 3 wins each and 3 draws in 9 games. If the Seagulls can trap a big fish like Arsenal on Saturday, it will provide a huge confidence boost to their whole squad and will renew the fans’ faith in them. Both teams like to play with possession and like to build up from the back. It will be a big battle in the midfield with ball retention a key factor on both sets of players’ minds.

The young English forward has been going from strength to strength ever since making his debut in 2019. He has since been a consistent member in the starting 11 and his versatility as helped him in that regard, playing various positions. However, he has now been playing regularly in his preferred position as a forward, and the 20-year-old has shown his skills and talents to cement his spot. With 9 goals and 5 assists so far in the Premier League this season, Saka is enjoying his best-ever season for the Gunners. His performances have elevated Arsenal to another level and he has been the most consistent performer in the team. The young forward has drawn praise from various pundits and players around the world with his dazzling displays, and defenders are now afraid at the sight of the young man. He has formed good partnerships with Martin Odegaard and Emile Smith Rowe in the Arsenal team and will be the main man on Saturday once again as the Gunners look to bounce back from Monday night.

After starting brilliantly with two goals in two games, Neal Maupay suffered a lapse in performance. The Frenchman has not scored since December 2021 and is on one of the worst runs of his career. He is just 1 goal away from becoming the top Premier League scorer for the Seagulls and is currently on 26 goals, level with Glenn Murray. Maupay has shown glimpses of his true attacking and prolific nature this season and has yet to find consistency, and will hope that he can inch one step closer to besting his tally of 10 goals on Saturday. Maupay has started every game but four in the league so far, and he has been the best attacker in the Brighton side. He will be expected to lead the Brighton line again against Arsenal, even after his missed penalty and overall underwhelming performance against Norwich City last weekend.