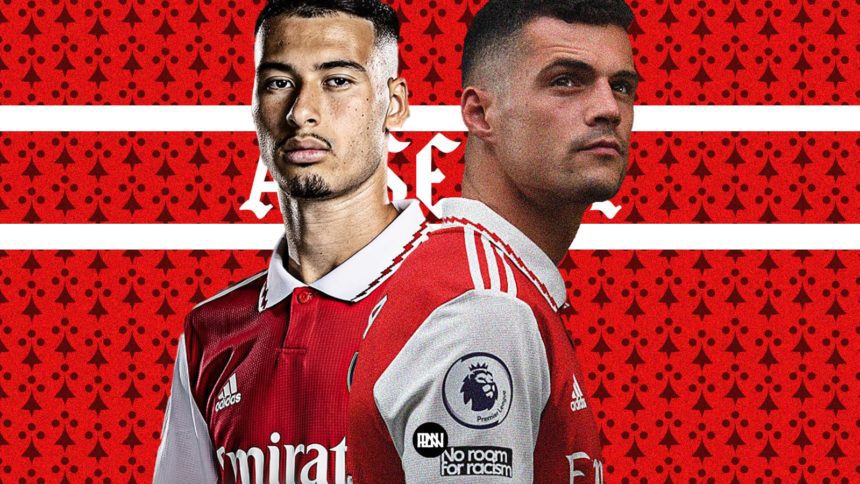 A roar of humongous joy and a feeling of witnessing light at the end of the tunnel ruptured the Emirates Stadium on Sunday as Arsenal finally emerged victorious over Liverpool. Nine games in, eight wins, and top of the league in October is something the Gunners faithful arguably did not expect, but their team is setting the standards this season.

Mikel Arteta was doubted and called for the sack after results did not go his way, but he stuck to his guns. And the club are certainly reaping the rewards for showing faith in his process and vision. Arteta’s tactics were once again successful and his decision to start Takehiro Tomiyasu at left back proved to be a masterstroke.

Perhaps what surprised everyone is the fact that Arsenal beat Liverpool by playing Liverpool’s game. Intense pressing, winning the second balls, devastating on the break, and stamping their authority on the game are Jurgen Klopp’s recipe for success, but Arsenal displayed this at the Emirates. They had a specific plan to target Liverpool’s right-hand side and showed their poise defensively, too. So here is an article that looks at how Arsenal’s left side got the better of Liverpool during their thrilling 3-2 statement win.

Oleksandr Zinchenko was sidelined because of an injury, but Arteta had the option to pick either Kieran Tierney or Tomiyasu at left-back. The Spanish manager went for the latter with Mohamed Salah’s threat in mind. Tomiyasu has proved to be a valuable asset, especially when his role is to win duels against the opposition winger.

The result? Salah did not have a shot on goal and was subsequently subbed off during the 65th minute. But credit had to be given to Tomiyasu, as Salah is unquestionably one of the hardest to defend against due to his ability to wriggle past players and run in behind the defense. Moreover, Tomiyasu being right-footed meant that the angles suited him to defend against the Egyptian.

Getting touch-tight to Salah when defending him in a 1v1 situation has proved to be an admirable strategy in the past. Many commit to the ball or leave him acres of space, and we have seen how Salah is devastating in those situations. However, Tomiyasu did not allow his opponent to get past him and knew when to commit and when not to.

Another of Liverpool’s trademark approach is Virgil van Dijk’s long switches from the left side of the pitch to Salah on the right. The winger is very aggressive and uses his physicality to win duels, but Tomiyasu was tasked with stopping this. Once again, Tomiyasu himself is excellent in battles and won the majority of the deliveries played to his side.

The man-marking approach worked perfectly even when Salah looked to drift inside and rotate positions with Jota and Nunez. Tomiyasu followed him everywhere, while Xhaka, being one of the best readers of the game, covered him in the wide areas. As a result, Liverpool struggled to create any chances from the right wing, where most of the chances are crafted by the likes of Alexander Arnold and Salah. 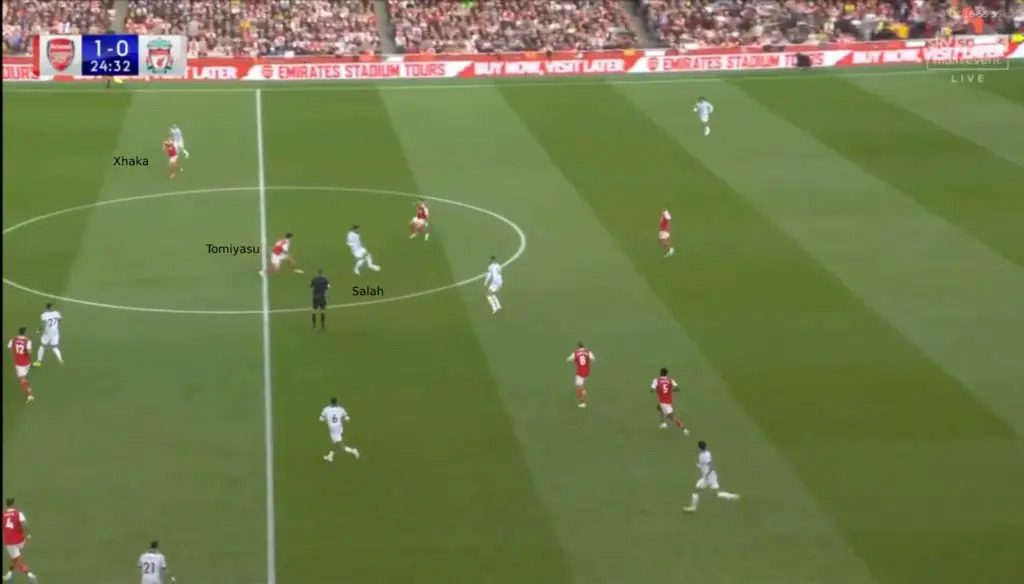 Arsenal also faced a problem with Liverpool’s 4-2-4 formation. The front four were isolated against Arsenal’s back 4 and if Liverpool wins the first and second balls, the Gunners would unquestionably be exposed. But Arteta dealt with this by dropping back Xhaka in order to create a numerical superiority at the back and win the second balls. 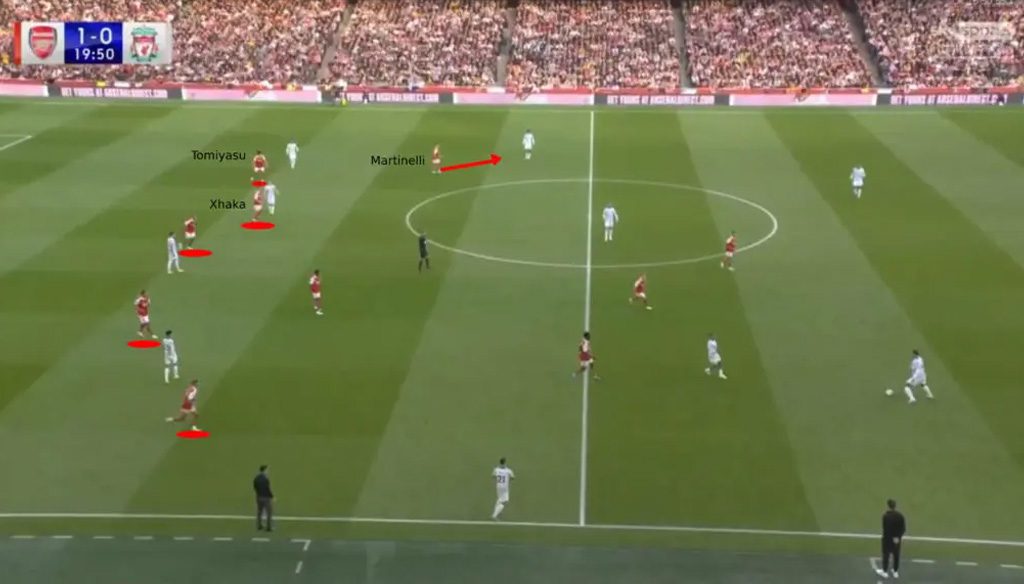 When Xhaka was in midfield, Martinelli dropped back to form a back 5 and it denied Liverpool the opportunity to create good chances despite having plenty of possession. Arteta very well knew that Liverpool are still one of the best teams on the planet in terms of quality and they will have their moments of brilliance. So, doubling up on Salah also helped Arsenal and, in particular, Tomiyasu when the Reds looked threatening.

Arsenal’s left side in attack

Arsenal scored within the first minute thanks to Gabriel Martinelli’s brilliant run and he certainly did not stop running ever since the goal. The Gunners clearly navigated a plan to hunt Liverpool’s right side, and it worked wonders. The front four were vibrant out of possession, and their press caused problems in the early part of the game. Once they won the ball, Martinelli was isolated 1v1 against Alexander Arnold and that was exactly what Arteta wanted.

Liverpool’s right side has been the source of debates for over a month, and it will continue after this game as well. Arsenal’s center halves and Partey looked to play the ball over the top for Martinelli to run in behind Trent or Gomez. From there, Martinelli’s pace and trickery stole the show.

The second goal also displayed this. The Brazilian was up against Henderson and Trent, and he once again got the better of the two before teeing up Saka. He was a headache for Liverpool’s defense and is turning out to be one of Arsenal’s best players this season.

While Martinelli and Tomiyasu grabbed the headlines, Granit Xhaka’s tireless work ethic, combined with his technical ability, proved to be the important factor in the victory. As mentioned above, his defensive covering paved the way for Arsenal to stop Liverpool and hit them on transition.

When Arsenal dominated the proceedings in the second half, his positioning in the half spaces created overloads. They had 27 percent of their shots from the left side, compared to none from the right (73% from the middle). Arteta’s side also had 41 percent of their attacks from that area of the pitch.

In the below passage of play, Jesus makes a run between the center-back and the fullback and controls the ball. But look at Xhaka being ready to pounce on the second ball. Jesus nods down the ball and Arsenal create an overload on the left side. After several attempts to clear the ball, Arsenal eventually win the penalty, but it all started with Xhaka’s positioning. One could also say Liverpool got the taste of their own medicine.

Here’s another example of the linkup on the left. Xhaka drifts in the left half-space, receiving the ball and Martinelli makes a run from the wide areas with catches Liverpool out. The three players on that side were formidable, both on and off the ball as they dragged Liverpool out of position.

Arsenal carved open Liverpool and rightfully deserved the three points. Liverpool had their moments, but the Gunners defended them with precision despite conceding twice. Tomiyasu – starting his first game of the season, deserved the plaudits as Salah was tamed. With Luis Diaz also subbed off after the injury, Liverpool struggled for options as Arsenal took control of the game.

Of course, Granit Xhaka deserves his flowers as well, but Martinelli was the one who caused the damage. Runs in behind? Check. Willing to take on players? Check. Defensive positioning and pressing? Check. His all-round show was the highlight of the game, without a doubt and he is blossoming into one of the best wingers in the Premier League.

Furthermore, as we get through the use of left flank and half-spaces – the dynamics, as earlier suggested, of Oleksandr Zinchenko has been integral to gain competent control over the game. Here you can find a glimpse of Alex Zinchenko and how his involvement helps Arsenal technically. 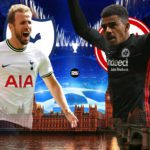 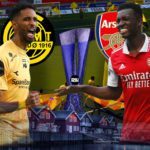