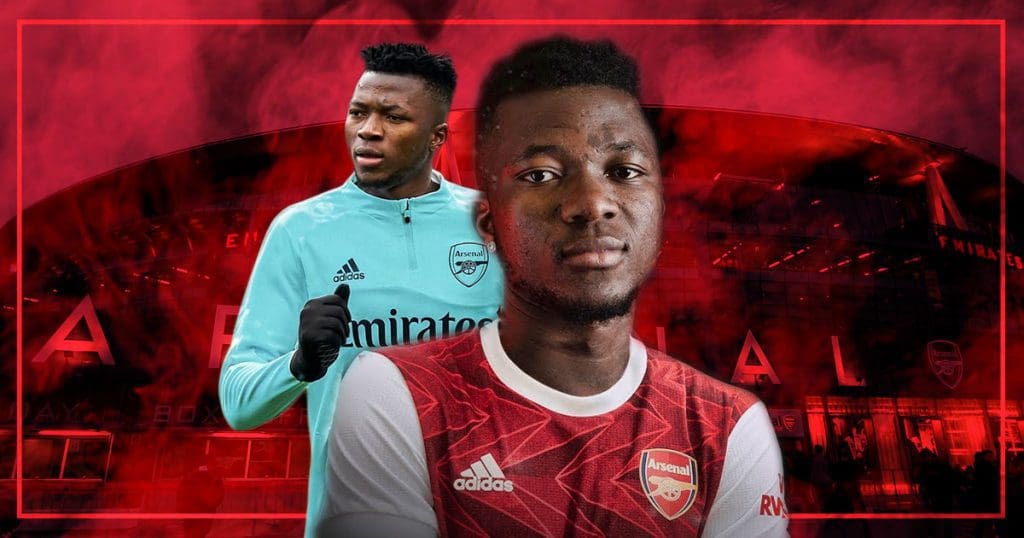 Arsenal had the 3rd best defence in the Premier League this season, however, the Gunners only managed to keep 12 clean sheets.

This record portrays that Mikel Arteta’s men have not been all that incredible at the back this season, with the Gunners losing several games by the margin of a single goal. Although there have also been occasions when Arsenal have been in a winning position but have made life difficult for themselves by defensive errors which have resulted into goals.

Mikel Arteta understood the problem last season itself, courtesy of which Gabriel Magalhaes was brought to the club, and now Arteta has found Gabriel’s center-back partner. Bayer Leverkusen defender Edmond Tapsoba has been identified by Arsenal as a priority for the summer, with Arteta pushing to make the defender the first signing of this transfer window.

22-year-old Edmond Tapsoba joined Bayer Leverkusen from the Portuguese side Vitória Guimarães SC last year in the January transfer window for £16.20 million. The German outfit wanted a young and solid center-back in their ranks, and Tapsoba has delivered on that promise over the last year and a half.

Although Bayer Leverkusen have moved from 5th to 6th on the table from last year, they have had the 3rd best defence in the league this season, ahead of Borussia Dortmund and Bayern Munich. Edmond Tapsoba has been a huge part of this journey as he made 31 appearances out of a possible 34 outings. At only 22, Tapsoba has become a mainstay in the Leverkusen defence due to several facets of his game.

Tapsoba has averaged an 89% pass completion rate this season, while he also completes 89 passes per 90 minutes. The youngster does not shy away from playing the ball out of the back while he is also an able dribbler when in possession. However, this has not let Tapsoba forget his primary responsibilities as a defender, with the 22-year-old making 2 interceptions a game this season. The center-back has also made 3 clearances per 90 minutes and is quick to sniff out any and all danger in the six-yard box.

Fast and aware without the ball, technically gifted in possession- Edmond Tapsoba has been one of Bundesliga’s best defenders this season.

Why does Arsenal need Edmond Tapsoba?

Arsenal have been prone to several defensive errors at the back this year due to the lack of a leader and a center-back who will command the ball at his feet with confidence. Strong and burly attackers have been able to dominate the Arsenal defence while Gabriel is the only defender with a lot of pace at the club.

Edmond Tapsoba fills up all these gaps, and most importantly, he will do so for a long time given his age. The Burkin Faso international could prove to be a calming presence at the back for Arsenal, while his strength and pace will solve Arsenal’s defensive issues to a great extent. With Arsenal also targeting a central midfielder, Taspoba becomes the ideal signing for the Gunners to become defensively resolute.

All the big clubs, including Champions League finalists Manchester City and Chelsea, have gained success this season due to their impressive displays at the back and their miserly defence. The two clubs have kept 37 Premier League clean sheets between them this season, while they have also only conceded 4 goals each in their respective Champions League campaigns. These are the levels Arsenal need to achieve if they want to finish in the Top 4 next season.

Thus, Edmond Tapsoba could be the defender that resolves Arsenal’s problems at the back while also forming a formidable partnership alongside Gabriel Magalhaes. The pair are a perfect combination of a right-footed and left-footed center-back in the defence, a quirk that must have caught Mikel Arteta’s eyes as well.

Can Arsenal realistically sign Tapsoba and if so, when will the deal be completed?

Bayer Leverkusen are under no obligation to let the defender go as the 22-year-old has a contract until June 2026 with the German outfit. Tapsoba does not have a release clause, however, according to reports, Leverkusen are ready to enter into negotiations if a £52 million bid is made for the center-back.

Mikel Arteta feels it is essential that Arsenal sign the defender this summer as they also face competition from Premier League rivals Manchester United. These are not the only deals Arsenal want to complete this summer, with the club also eyeing a central midfielder and either one of Houssem Aouar or Emiliano Buendia to boost the forward line next season.

Moreover, David Luiz leaving the club in the summer not only frees up substantial wages but also leaves a vacant spot in the defence. Edmond Tapsoba will be a dream signing for the Gunners, should they go ahead and complete the deal this summer.