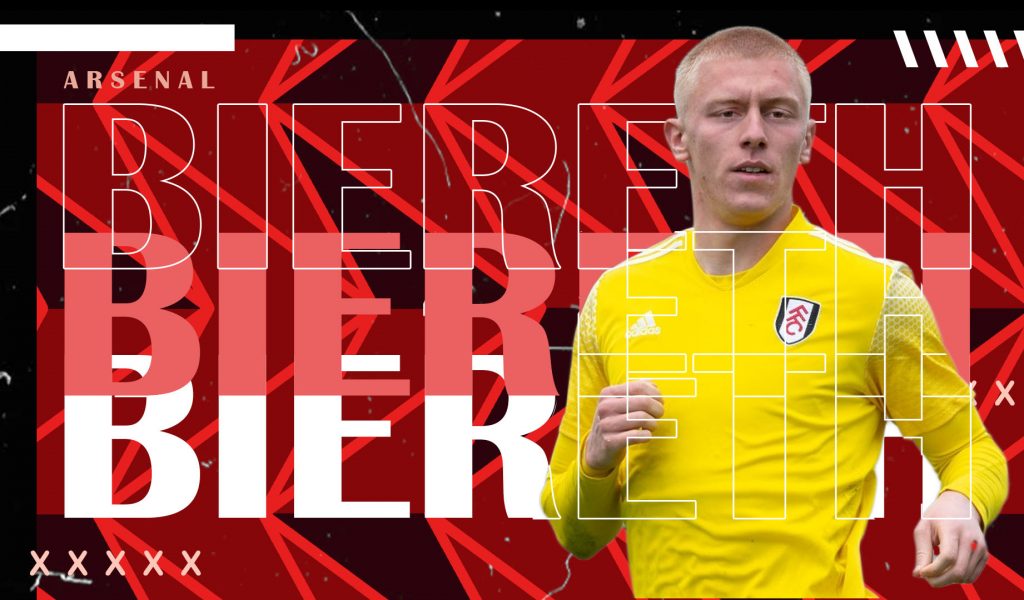 Arsenal have completed the signing of 18-year-old striker Mika Biereth from Fulham after the player rejected a professional contract from the club in search of a move elsewhere. The highly-rated forward is a terrorizing prospect, having had a remarkable season in front of goal at Craven Cottage. The teenage sensation finished as the U-18 Premier League South’s top scorer from last season, boasting an incredible tally of 21 goals in 21 appearances. Additionally, the youngster also provided 13 assists, thus, finishing with 34 goal involvements in the division – highest across the North and South divisions.

Biereth was a standout performer for Fulham’s U-18 squad last season. The young striker not only recorded incredible numbers but also guided the team to the top of the league table; securing a title clash with North champions Manchester City. Although Fulham lost the final to Manchester City, Biereth played was a vital part of the club’s journey last season, as they narrowly missed out on qualifying for the U-19 UEFA Youth League but succeeded in winning the Premier League South for the second successive season.

The 18-year-old will be part of an ambitious Arsenal youth set-up next season and will be hoping to replicate his goalscoring tally from last season. Biereth is an exceptional talent with enormous potential who will be keen on rising through the ranks and establishing himself as a first-team player in the near future.

Besides being a constant threat in the 18-yard box, Biereth is a versatile talent with the ability to play at multiple positions across the front line. The forward’s quick acceleration and searing pace allows him to glide past defenders rendering him an equally dangerous threat on the flanks and as a number nine. The youngster also possesses the intelligence to run into spaces and at defenders with the ball at his feet.

Additionally, Mika Biereth is a naturally fit footballer who has been equally impressive and consistent against different levels of opponents in the south division. He had some decent runs in the second half of the season, having recorded ten goal involvements in London derbies in 2021. The teenager scored goals against Chelsea and Arsenal and a dazzling 68-minute hat-trick against Tottenham Hotspur last season.

The 18-year-old sudden rise is not surprising considering Fulham’s ambition to nurture quality youngsters, with the mentality to compete at the highest levels of the game. Speaking to The Athletic, Fulham’s academy director, Huw Jennings, highlighted the club’s aim to produce quality talents and feed their ambition.

Jennings stated that the club works within the player’s best interests and encourages them to believe in their ambition, “When players come and join us, we say, ‘Look at some point, we would be delighted for you to go and play for Real Madrid and win the Champions League. If that’s your ambition.’  Further, he also highlighted is the importance of producing players who work equally well as individuals and as a collective. “It’s not the other way around, we don’t set about creating team success, we set about creating platforms for individual players to fulfil their potential,” he continued.

Mika Biereth made his first appearance for Fulham’s U-18 team in 2018, and has since, steadily risen to establish himself as a highly-rated prospect within English football. The youngster scored 26 goals in 41 appearances for Fulham since his debut at the club. Additionally, the youngster also scored more goals than any of Arsenal’s U-18 strikers last season.

The 18-year-old will be a welcome addition to Arsenal’s academy, which has succeeded in producing quality first-team players in recent years. Biereth will be keen on moving to the U-23 squad in the upcoming season, eventually carving a path to the first-team set-up. With Mika Biereth, the Gunners have a quality prospect within their ranks as the club look to improve their squad and find their way back to the top in the upcoming season.