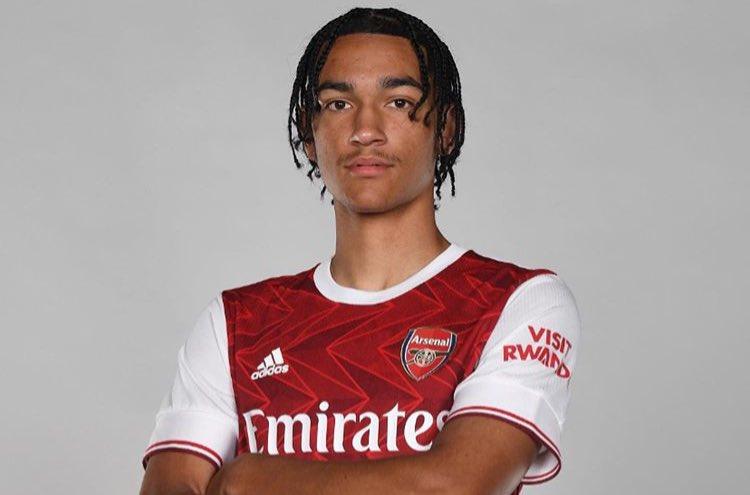 When a club like Arsenal is mentioned, all that could come to ones mind is the young crop of players that the club has bee able to produce over the years.

The likes of Bukayo Saka, Reiss Nelson and Joe Willock have all had the chance to feature for the first team and Folarin Balogun was the latest in the that regard.

The name that is currently being whispered is that of Kido Taylor-Hart, who is said to be delivering a string of good performances for the junior side.

Born on September 30, 2002, Kido Taylor-Hart is just 18 years old. He plays as a winger for the academy side and has already been capped at the Under-17 level for the Three Lions national team.

The boyhood Arsenal player has been at the club since the age of seven and it is no fluke that he plays for the club with everything he has within him.

The promising winger has represented the Gunners at all levels at the junior side to the Under-23s and was unfortunate to have bee restricted to just 10 appearances last season as a result of an injury sustained.

What are his specialties?

Taylor-Hart is a talented winger, who can play on the left or the right. He has been a bit unlucky with injuries and will be hoping to break into the U23 side this season, having already impressed when training with the first team.

To anyone who is yet to watch Taylor-Hart, the first thing to refer to would be a video posted by the club’s academy on Twitter some time back about the 18-year-old.

That video saw some fans liken him to former Manchester City winger Leroy Sane for all the pace he has got in him. He is fast and very pacy which is very influential in his game with the academy.

He may not be too powerful with regards to his dribbling game but once he decides to make a mess out of an opponent, he does that with ease.

Taylor-Hart also has a good vision in the final third of the opposition’s half. He is also a thorn in the flesh in front of goal and that has been evident in the games he’s played this season for the youth team – scoring four goals and providing three assists in seven appearances.

The decision from here?

Mikel Arteta’s left-wing has been a problem for him since taking over last season. He has had to make players adjust to that role and while some have excelled, others have failed to turn up.

It may be a little too early to introduce Taylor-Hart into the first team but the club will be hoping they do not make the same mistake as they did with Serge Gnabry.

He could be introduced in a cup game as a starter and that could be the turning point for the young forward but it is all up to Arteta to hand over a huge but worth opportunity to the ‘speedster’.

It might take some time before he turns up for the first team, but we need to starting speaking about him & his qualities sooner rather than later.

How many fans will each club be allowed to have in stadiums?
Theo Walcott, the differential? | FPL GW11
To Top