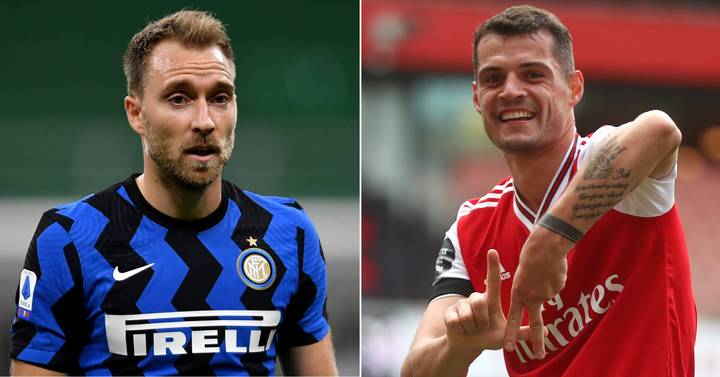 It’s as weird as it gets when you see news pieces discussing a probable swap deal between Granit Xhaka, former Arsenal club captain, and Christian Eriksen, a former Tottenham Hotspur player. The Danish international currently finds himself on the outskirts of the Inter Milan squad under manager Antonio Conte, who he has seemingly failed to impress ever since his January move last winter from Tottenham. While Granit Xhaka’s story seems like one of those where you go to the brink and come back and are now set to go to the brink again.

Christian Eriksen and Granit Xhaka are no poor footballers, while one has topped the assist table charts in his prime days in the white half of the North London, the other has been assigned as the club captain of one of the biggest and historic clubs in England, then why do they find themselves as surplus to requirements at their respective clubs? While Granit Xhaka was massively favoured by the new Arsenal head coach, Mikel Arteta, however, the arrival of Thomas Partey has meant that the Swiss international has found his place in the side under scrutiny and him being dropped in a high profile fixture as the match against Manchester United at Old Trafford seemingly proved to be enough of evidence that the Spaniard is favouring Partey over Xhaka.

Christian Eriksen, on the other hand, was shifted out of Tottenham Hotspur after the two parties couldn’t reach an agreement over a new deal and with Daniel Levy not prepared to lose his prized possession for free, Eriksen was sold to Serie A outfit Inter Milan in a deal worth around £20million, however, with just 1400 minutes of game time and 15 starts, Eriksen hasn’t able to cement his place under Conte and the 28-year-old has now admitted that his time at Inter hasn’t been how he “dreamt.”

“This isn’t what I dreamed of,” Eriksen was quoted saying, “All players want to play as much as possible, but the coach decides who gets to go on the pitch.

“It is a strange situation, as the fans want to see me playing more and so would I, but the coach has different ideas and as a player I have to respect that.”

Their fate at their respective clubs look sealed.