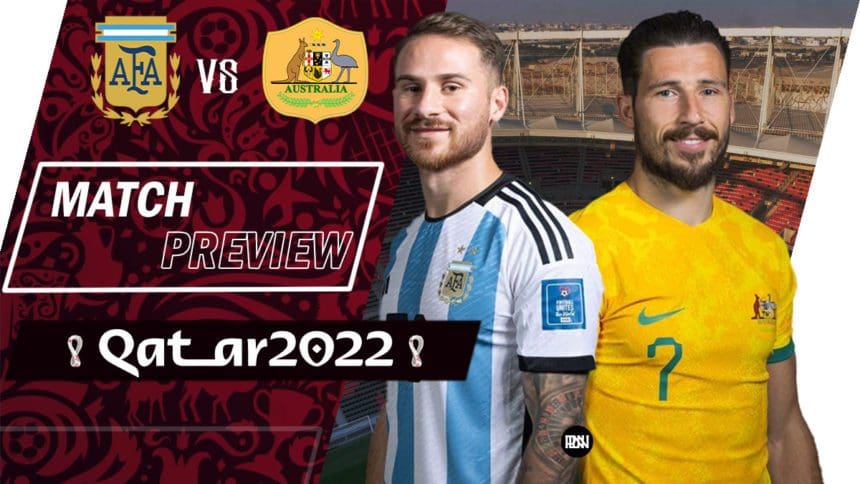 Both Lionel Messi and Argentina will be counting their lucky stars they aren’t joining the likes of Belgium and Germany going out the World Cup exit door, following on from their shock opening day defeat to Saudi Arabia. Wins against Mexico and Poland have led the Argentinians to continue their World Cup surge and will be aiming for a place in the quarter-finals when they take on an inspired Australia at Ahmad bin Ali Stadium on Saturday evening.

The Socceroos booked their last-16 place after a shock 1-0 win over proposed dark horses Denmark and will be looking to cause arguably the biggest shock in FIFA World Cup history, providing they manage to topple Messi & co.

Argentina secured their place with a hard-earned victory over a lackluster Poland side on Wednesday, with goals from Alexis Mac Allister and Julian Alvarez helped the Albiceleste to post a second successive 2-0 win and put the opening game shock well behind them.

For the 11th time in the past 12 finals, Argentina have progressed through to the knockout rounds, and despite their drama against Saudi Arabia, they still remain neutral’s and pundit’s heavy favourites to lift the prestigious gong for a third time.

Manager, Lionel Scaloni has bemoaned the fact that his side only had just over two days rest for the last-16 tie, an argument that can also be said by the Aussies, however, Scaloni will know that his nation won’t be so accepting of such excuses or forgiving if they fail to reach the next stage. To combat any potential tiredness from a hard-fought victory, Argentina possesses an abundance of talent to call upon, as the likes of Mac Allister, Enzo Fernandez and Julian Alvarez have impressively shown.

Though Messi remains the sole instigator of Argentina’s ambitions and his undisputed playmaking creativity will be heavily demanded as the Albiceleste potentially take on a resilient, hard-working and stout Socceroos resistance.

The history doesn’t favour Australia, they have in fact, lost their last four meetings with the World Cup favourites – though they earned a surprise 2-0 win when two very different squads clashed at the 2021 Tokyo Olympics.

No matter the end result on Saturday, Australia know they have achieved greatness under Graham Arnold already, taking part in the World Cup knockout rounds for the first time since 2006 and they come into this contest with no pressure and expectation at all, which could arguably make them a dangerous proposition for Scaloni’s men.

It was indeed an inspired and hard-fought win against the Danes, requiring a solid and resilient performance from the likes of Harry Souttar, Jackson Irvine and Matt Ryan in the Aussie goal. It wasn’t until a brilliant Matthew Leckie strike in the 60th minute which handed the Australians a moment of World Cup magic.

Already swept aside by a rampant Kylian Mbappe & co, running out 4-1 winners in the sides’ opening fixture, Arnold’s well-drilled unit will certainly be outsiders to topple the mighty Argentina and make the final eight for the first time ever. However, the competition so far has thrown up some unexpected results and turns which means this encounter is certainly one to keep an eye on.

Argentina have thankfully come away from tough encounters with Mexico and Poland with no new injury worries, and its arguably inconceivable to think that Lionel Scaloni could change a winning team from the side which consummately triumphed over the Polish.

However, he has tinkered much so far in this competition especially following their defeat to Saudi Arabia in their opening group stage fixture and that could well mean the likes of Lautaro Martinez coming back into contention despite his goalless start to the competition, in place of Julian Alvarez who made a remarkable impression scoring a wonder strike against Poland.

Also, Lyon’s Nicolas Tagliafico will be hoping that his impressive cameo against the Poles will be enough to usurp Marcos Acuna at left-back. Wonderkid midfielder Enzo Fernandez should continue on in midfield along with Mac Allister and Atletico Madrid’s Rodrigo De Paul – who seems a huge favourite of Scaloni’s.

Australia may also be reluctant to make wholesale changes too, as Nathaniel Atkinson and Fran Karacic – who started the first and second games respectively – compete with Milos Degenek who has put in a solid and professional showing against Denmark.

Keanu Baccus also impressed after coming on for Craig Goodwin at half-time, and Graham Arnold may indeed be tempted to include the inexperienced St Mirren midfielder from the start on Saturday.

As Argentina may have already found out all three of their World Cup games so far, teams are automatically resigned to handing them possession of the ball, giving them the tough task of breaching and unlocking their deep defensive block.

Saudi Arabia performed all that and more, not only defending resolutely but going after Argentina’s soft-belly midfield in Leandro Paredes, Papu Gomez and Rodrigo De Paul and tearing them to shreds with some swift, high-intensity and purposeful transitional play which ultimately led to their two wonder goals.

It’s unlikely Australia will do the same, but as they showed in their triumph over Denmark, they will aim to frustrate the life out of Scaloni’s men whilst also aiming to utilise the speed and industry of the likes of Jackson Irvine, Matthew Leckie and Mitchell Duke up front to drive them up the pitch and create opportunities.

That may be harder for to do as Scaloni has now potentially found the right midfield formula to not only penetrate deep blocks but also counter-press, stopping teams from countering against them. The midfield trio of Enzo Fernandez, Mac Allister and Rodrigo De Paul has provided Argentina with the industry, energy, enthusiasm but also the composure and control needed when in possession of the ball. The former two have been welcome additions to the fold, with both players bagging their first international goals against Mexico and Poland respectively.

It’s unlikely Scaloni will tinker with his midfield, but may change things in attack to give Argentina the best chance of easily breaking through the Socceroos’ potential resistance. That may mean a start for Lautaro Martinez who has failed to live up to his promise so far on the biggest stage.

It’s amazing to think that the unbelievable talents of Paulo Dybala has yet to step foot on the grandest footballing stage, with Scaloni stating that the AS Roma superstar’s non-selection has purely been for ‘tactical’ reasons. Will that change on Saturday evening?

What a moment for Mac Allister to bag his first international goal for Argentina, especially when they needed it most. While the Brighton & Hove Albion maestro has been given the dream opportunity to play with Lionel Messi, his father Carlos Mac Allister back in the 80s, had the grace of playing alongside the late great Diego Maradona.

A pure dream for his family line, and what an achievement it will be for Mac Allister to aid his nation in winning the World Cup gong, something his father didn’t have the opportunity in achieving.

The 23-year-old has enjoyed a terrific 2022/23 campaign so far, and his inclusion in the Argentina side was indeed well deserved, especially considering the star-studded squad at Scaloni’s disposal. But, what Mac Allister offers Argentina’s midfield is incredibly unique, unlike any of Scaloni’s other midfield weapons. Versatility, composure, control and a footballing brain that just keeps on ticking.

Alexis Mac Allister, take a bow. He has excelled as a controlling 6 in a double pivot for Brighton. He comes to the World Cup tasked with filling the void left by Lo Celso and excelled as a box-to-box 8 & attacking threat in the group decider. Superb adaptability. What a talent.

The Brighton midfielder is excelling this campaign, and his stock is certainly rising. Four years ago, Mac Allister was an unknown quantity, plying his trade in the Argentinian First Division with Argentinos Juniors. Four years on, he’s recorded five goals so far for Brighton in the Premier League, and the way in which he took his first international goal against Poland shows a player playing with great confidence and freedom. Long may it continue, what a story.

Leckie was 15 years old the only time the Socceroos won their way into the last 16 at a World Cup in 2006. Back then, the winger must have been dreaming of making such history in his own right, emulating those achievements whilst also being a key figure for his country. 15 years later, he’d certainly be forgiven for confidently predicting he would go on to do just that.

Wednesday’s game saw Leckie score the goal that not only defeated the 10th-ranked team in the world, but also send Australia into the last 16, creating history. “It’s amazing. As a young boy, you dream big,” a still somewhat dazed Leckie said after the game. “When I decided that I really want to be a footballer, you don’t really notice, but watching the Socceroos could be the reason why.

“It’s moments like this that build the game, and potentially give young kids inspiration to walk on and be a footballer one day.”

Leckie is a player encompassing what Australian football is all about. He’s hard-working, resilient, not one of the most fancied footballers around but a player who gives his all, especially when his country needs it most. And he’s one of a few Australians to have featured at the top level in the European game, playing for the likes Borussia Mochengladbach, Hertha Berlin and FC Ingolstadt. The Socceroos will desperately need his top-level experience competing against some of the game’s most elite footballing stars. 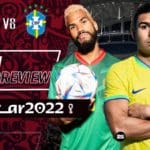 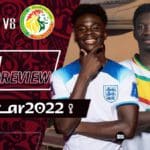