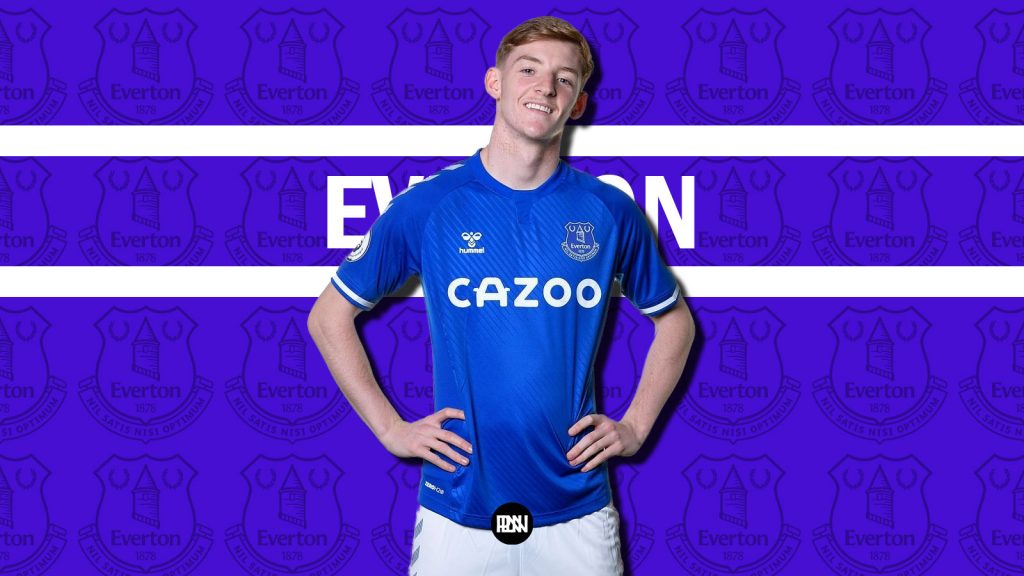 As the Z-Cars theme resounds over Goodison Park, the fans expect only one thing from the players – effort. Anthony Gordon epitomizes this. In their FA Cup match against Brentford, the Toffees needed a source of inspiration. Up stepped the 20-year old winger, winning the ball high up the pitch which resulted in a corner. He then passionately got the crowd going as Mason Holgate scored from the resulting corner.  The Everton faithful have certainly grown fond of Gordon’s determination and commitment.

The winger from Merseyside broke into the first team under Carlo Ancelotti back in the 2019/20 season. “He is a player with personality. You can find a lot of players with quality, but you have to show a strong personality and character who are not afraid to make decisions. Anthony is one of these” said the Italian as he heaped confidence on young Gordon.

Although he was introduced into the team in 2020, Gordon made his Everton debut as a 16-year-old in a Europa League game in 2017 – becoming the club’s sixth youngest player to make an appearance in the famous Blue shirt.

Ancelotti decided to give Gordon a run for his money after the Premier League re-started during the pandemic in June 2020. He was shy on the pitch and preferred to play it safe in the first month, but his hard work off the ball was rewarded with 4 starts. The following season his game time was limited so, he had an open conversation with the manager.

In search of regular game time, Gordon was loaned out to Preston North End in the second half of last season. He only started five games and made six further appearances from the bench with no goals to show for it. The winger had his moments but struggled to create an impact, largely down to the lack of game time.

Gordon’s time at Preston did not go as expected but it made him stronger and provided a valuable experience. The following season, he was ready to compete for a regular spot in his boyhood club. Everton signed Andros Townsend and Demarai Gray, further increasing the competition in the wide areas.

In September, Benitez started him at Old Trafford where he was impressive. Gordon was the only positive for Everton as they lost their form in the following months, putting them in a relegation tussle. As he grew into the team his performances also improved. The once shy winger is now a player who wants the ball to his feet and isn’t afraid to take on defenders.

With strong performances, he was handed his England U-21 cap. Gordon scored two goals on his debut against the Czech Republic and was awarded the Man of the Match.

Anthony Gordon was used both on the left and right-wing under Ancelotti. He even used him as a central midfielder in a couple of games. Under Benitez, he was mostly used on the right side.

An old fashioned wide player, he is comfortable using both his feet and capable of shifting across both sides while taking on a defender. His first goal against Brighton & Hove Albion showed this. Gordon receives the ball in the wide area and uses the right back’s overlapping run to cut inside and drive into the space. 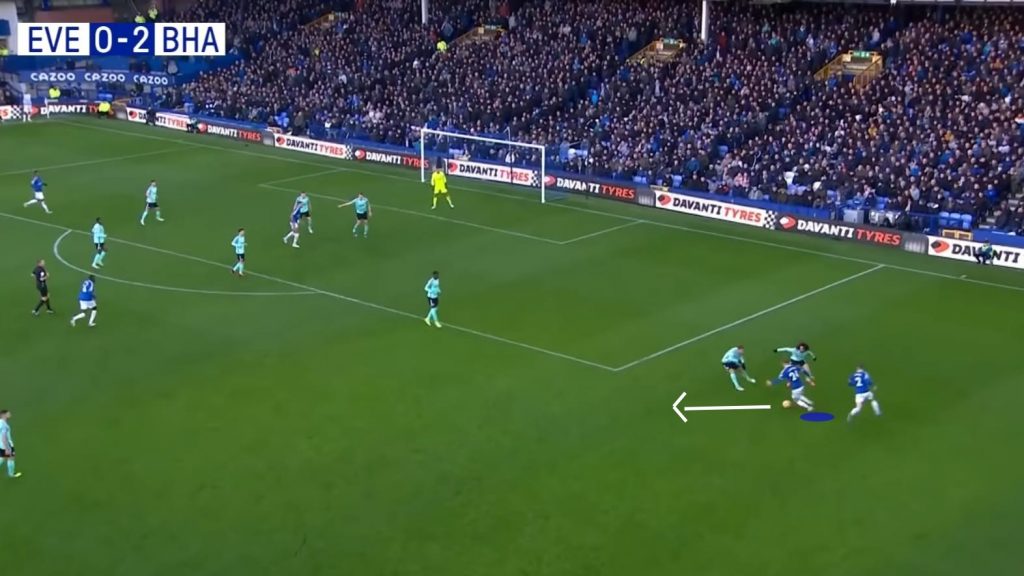 He miscues the shot and it takes a deflection before going into the net, but he was rewarded for trying to make things happen when the entire team were struggling. He scored another one, arriving into the box at the right time, but Everton lost the game. 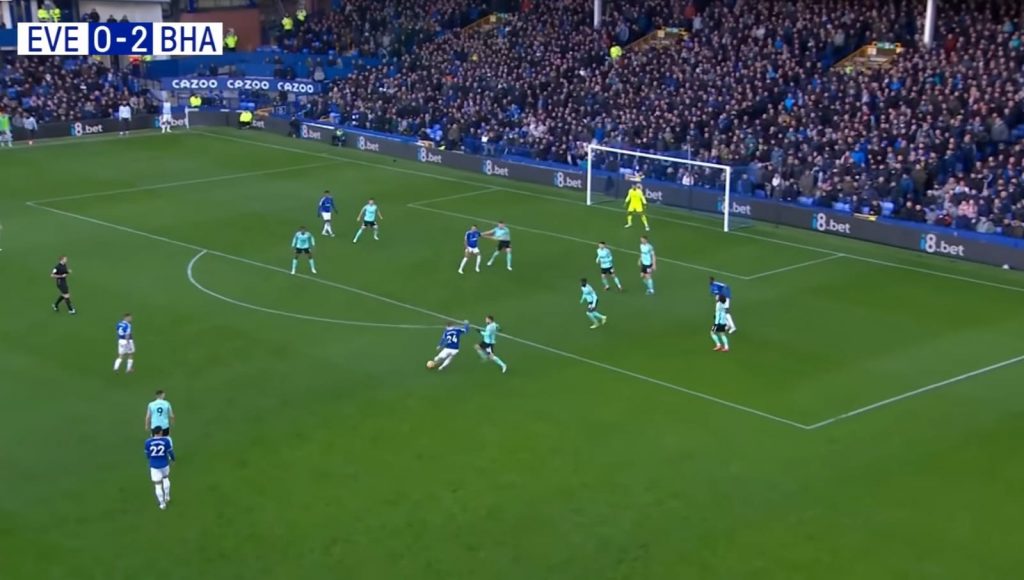 Similar to the above scenario, this time Gordon uses Coleman’s underlapping run which takes out a defender and provides him with an opportunity to target the space inside. He takes a shot with his left foot, but his effort slightly goes over the bar. 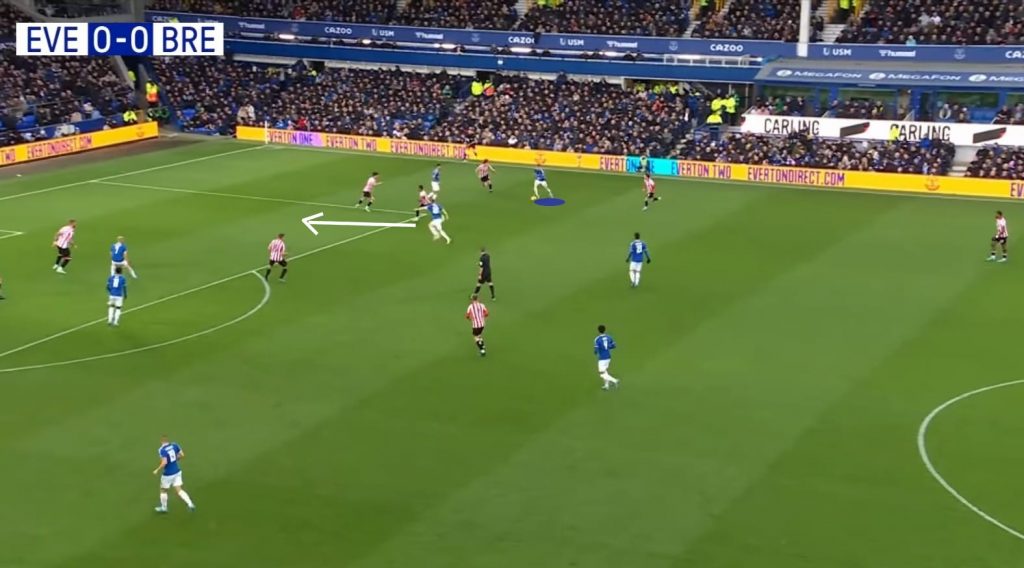 The 20-year-old winger also likes to whip in first time crosses when he has an opportunity. The Toffees were stumbling against Aston Villa and Ferguson – the interim manager decided to throw Gordon into the game in the second half. Within a minute, he delivered a first-time cross with his right foot which Richarlison failed to convert.

His energy single-handedly pushed both the players and the fans. This time, upon receiving the ball, Gordon opens up his body and cleverly plays a one-two with Richarlison. 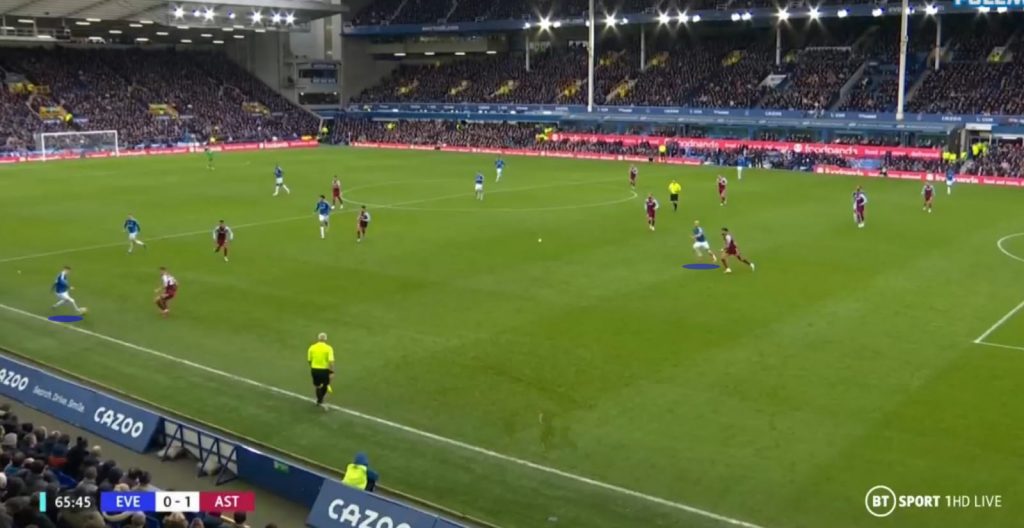 Lucas Digne – Aston Villa’s left-back got too tight to Gordon and couldn’t match his pace. The young winger delivers a perfect first-time ball between the centre backs but Calvert- Lewin could not finish it.  The quality of Calvert-Lewin and Richarlison’s movement in the box is excellent and Gordon’s crossing ability could come in handy for Everton under Frank Lampard. 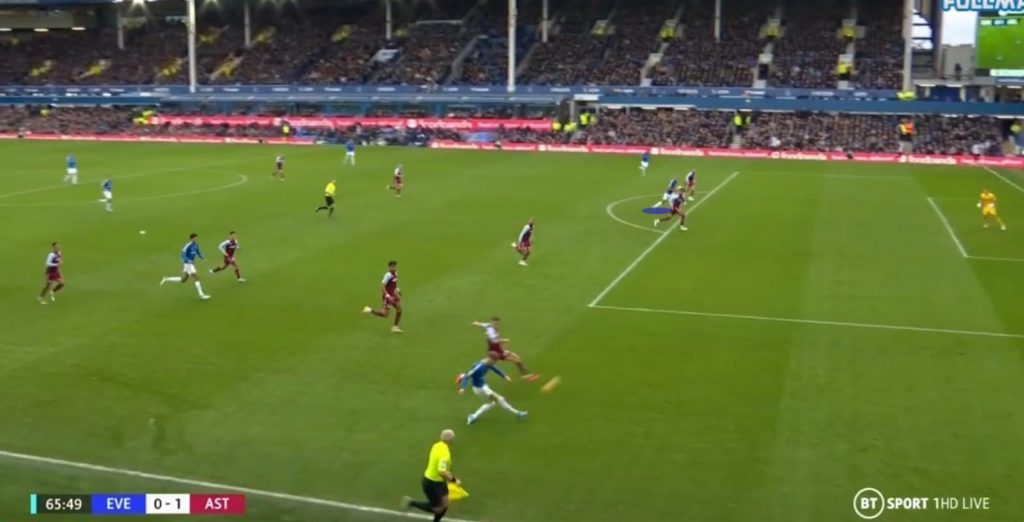 Although Gordon is quite raw in terms of movement off the ball, he has shown glimpses of his ability to create space for his teammate. Against Brentford, he makes a run in behind the defender which allows Gomes to pick out Richarlison in the box. This is an aspect of the game he will look to improve under Frank Lampard. 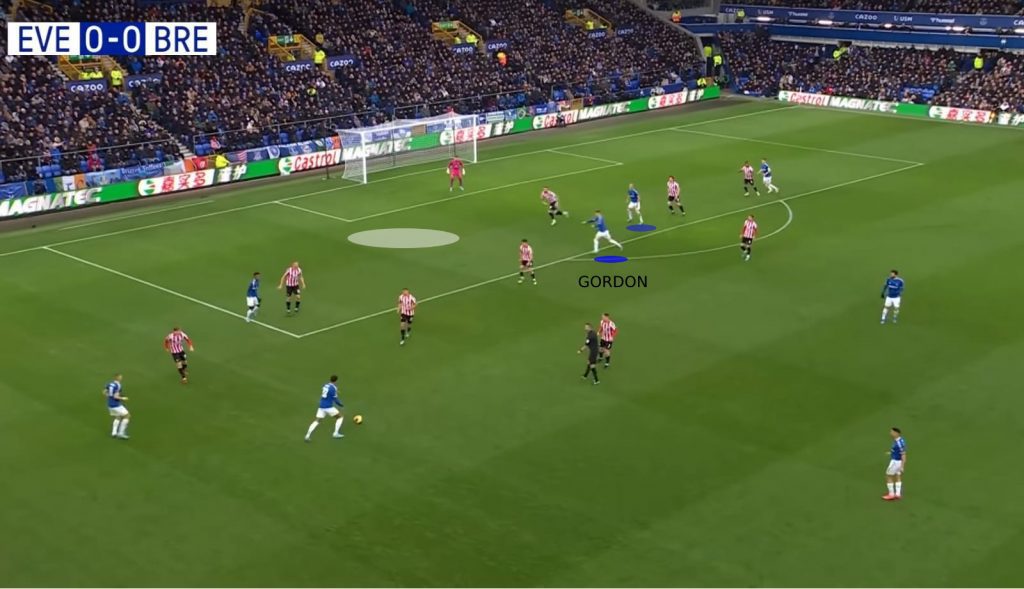 In recent years, the blue half of Merseyside haven’t been at their best in terms recruiting players. However, they seem to have found a diamond in the rough in Anthony Gordon. He is one of Everton’s own and represents what the club is all about. In Frank Lampard, they hired a manager who has a reputation of improving youngsters.

The former Chelsea manager knows that he can’t burden the young Englishman with too much pressure. Gordon has been Everton’s highlight in recent months and Lampard revealed that he has been studying the winger before he took over Everton.

“I’m excited. I’ve been watching Anthony this season, as an outsider, a neutral as such and love things about his game. He’s got great quality, he loves the club, it oozes him out and the fans love that.” said Frank Lampard after the victory against Brentford.

The future looks bright for young Anthony Gordon and under Lampard he will hope to develop his game further. In the meantime, Everton fans will hope they can survive the drop and see Gordon mature from a potential talent to a world-class player at their very own club.