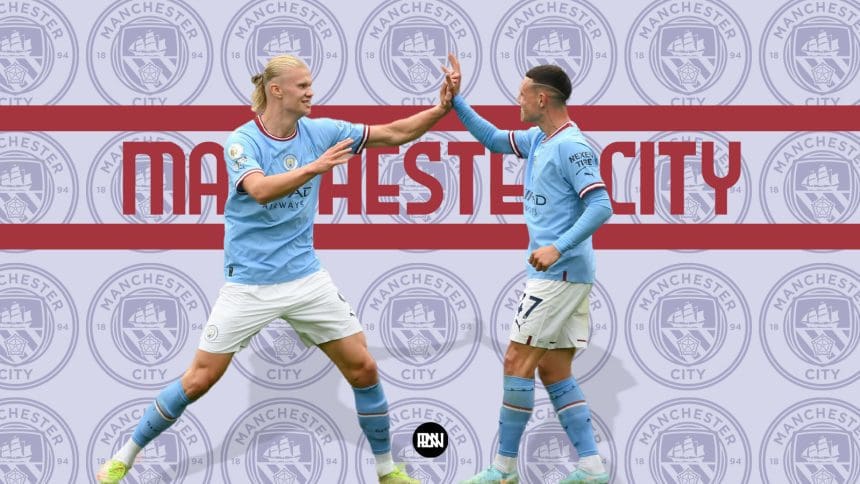 2-0 down at halftime against bogey opponents Crystal Palace, the Manchester City faithful had already started preparing for the worst. After all, Palace were the only team Man City failed to score against last season. But up stepped Erling Haaland – the Norwegian Viking taking the throne single-handedly by scoring a hat-trick as the Citizens secured a 4-2 comeback victory.

While Haaland has been the focal point this season, Pep Guardiola is often known for his rotations, especially in the wide areas (just ask every FPL manager). And this has proven to be the case this time around as well. In 5 matches, including the Community Shield against Liverpool, Guardiola has opted to start 5 different pairings on the wing. Does the City manager give leverage to the opposition while picking his wingers or is it only based on performance? Well, only he knows the answer to this question, but the opening games has certainly provided a few hints.

While players like Bernardo Silva, Jack Grealish, and Riyad Mahrez have been cycled in and out, Phil Foden has remained a key component of Guardiola’s plans. He has started the first 4 Premier League games partly due to his versatile nature to play on both sides. He played on the right side against West Ham United in the first game, but in the subsequent matches, he was instructed to switch sides.

Since Man City have sold both Raheem Sterling and Gabriel Jesus, Foden is currently the only winger to offer dynamism in the wide areas. This part of his game has been particularly useful against sides that defend deep and limit the spaces centrally. Against Crystal Palace and AFC Bournemouth, he was tasked with making those runs in behind from the edge of the box to create space for the midfielders and stretch the opponents. Here is an example of how Foden’s run created Gundogan’s goal against Scott Parker’s side. 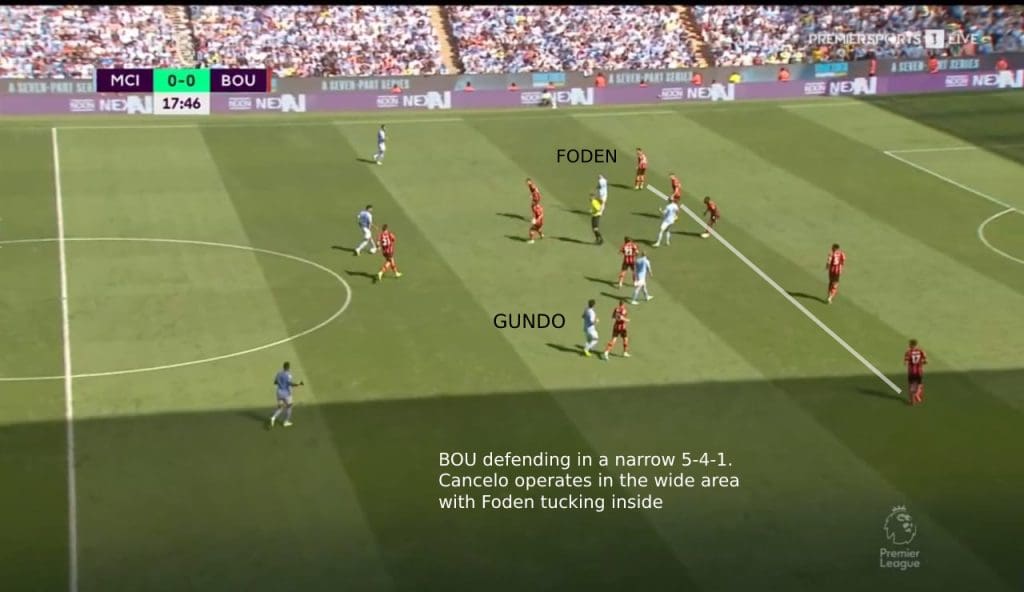 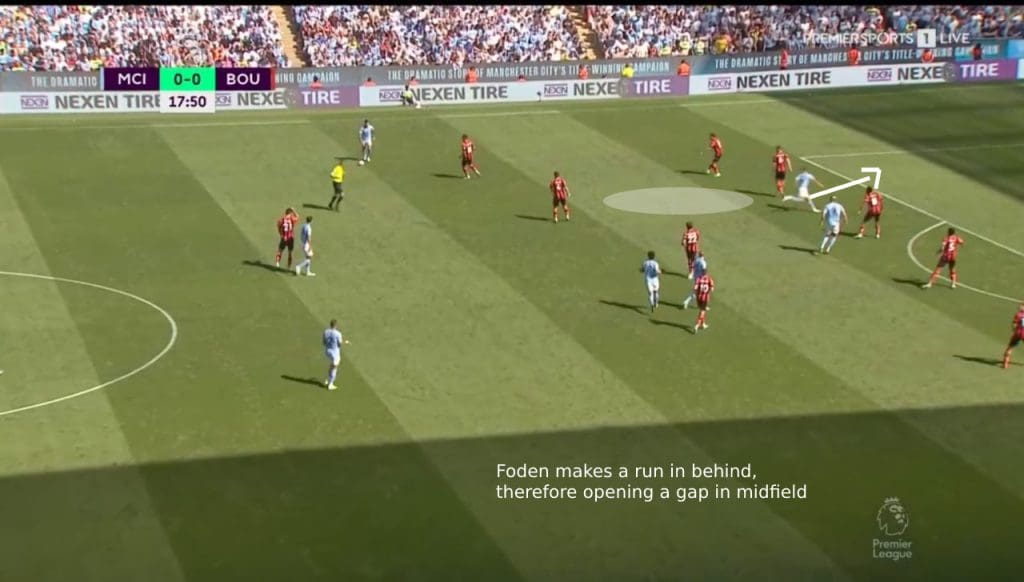 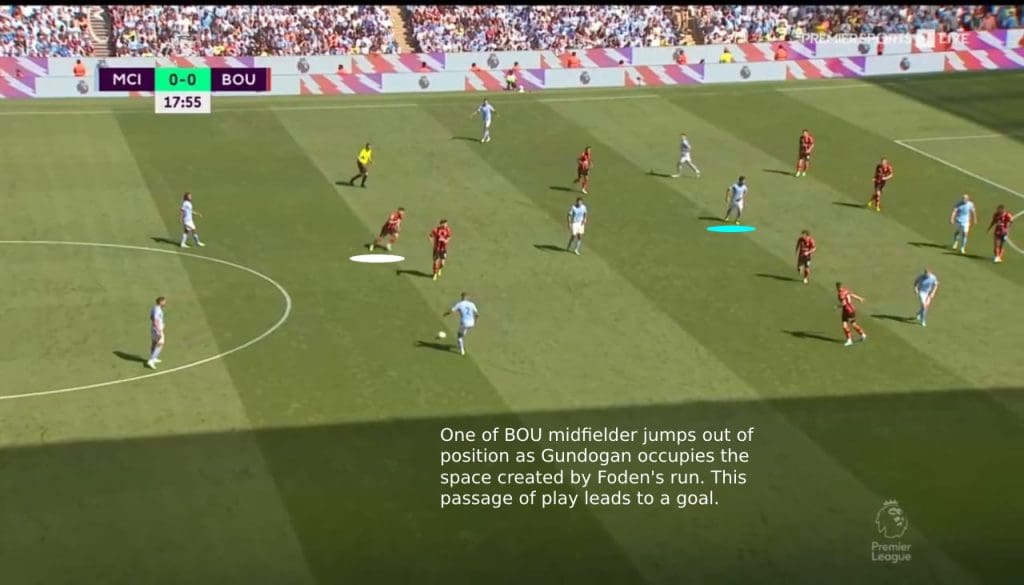 Both Bournemouth and Palace lined up in a 5-4-1 formation at the Etihad. In order to overload the defence and pin back the opposition fullbacks, Cancelo usually holds the width, with Foden tucking inside in the half-space. His runs in behind are something Jack Grealish cannot offer as the former Aston Villa man has a different profile as a winger.

Moreover, Pep usually prefers a left-footed player starting on the left side against a back 5 and Foden is the only player available for that role. Foden’s versatility is something Guardiola adores in a player and, with his ability on the ball, the England international will be an important cog in this Man City side.

Bernardo Silva’s emergence on the wing

Silva’s numbers this season from the right wing is certainly interesting although the sample size is small – two goals and an assist in two games to his name when played wide means that he offers direct competition to Mahrez. Additionally, his performance when played in that role has been nothing short of incredible. Bernardo Silva’s ability to hold the ball and dribble with precision earned him the nickname ‘bubblegum’ during his Monaco days and he’s certainly showing it again from the wing.

Silva provided the much-needed inspiration for Man City against Vieira’s Palace. His capacity to drag opponents provided the space for De Bruyne to overlap and swing dangerous crosses into the box. He was also involved in City’s first 3 goals against the Eagles and earned high praise from Guardiola after the game.

“When the game is going wrong he always steps forward. He loves to play in games when the situation is uncomfortable. Few players make a step backwards and he makes a step forward. That is why Bernardo is irreplaceable for many things for us,” Pep revealed after the game.

Furthermore, Gundogan has solidly started the season as well. The German’s late arrivals into the box, combined with his awareness, have been a crucial pattern for Man City so far. He has partnered with De Bruyne in central midfield and could continue to do so. As a result, if Silva continues to show his exemplary form, Pep could well slot him as a right winger. A front five of Haaland, Foden, Gundogan, De Bruyne, and Bernardo Silva also have the balance and the firepower required.

What does this mean for Riyad Mahrez & Jack Grealish?

Jack Grealish had an excellent preseason and rightly deserved to start against West Ham United. Despite having no goals or assists to show, his actions on the ball were admirable. He once again impressed the City fans after coming on as a substitute in the second half against Bournemouth. However, an unfortunate injury has kept him out of the action after the second game week.

Nevertheless, we did see glimpses of what he could offer on the wing. He has the presence to slow down the game and pick a pass at the right moment, as shown during Haaland’s second goal against West Ham.

Jack Grealish appreciation post. Held up the ball, dragged the opponents and made an excellent line breaking pass for Haaland’s second goal. Need more of this from him. pic.twitter.com/XICPSu8KdK

Guardiola added that Man City’s inability to handle Newcastle was because of their aggressive possession style and attempt to play quick passes in the final third. As a result of forcing issues, they suffered on the break as Allan Saint-Maximin and Callum Wilson ran the show. Hence, this is where Grealish’s ‘la pausa’ trait might prove handy. With that being said, Foden and Silva have performed well and could maintain their spot in the wide areas for the time being – so Grealish undoubtedly has competition on his hands.

Riyad Mahrez, meanwhile, has struggled to get going in the first month of the new season. He started three times but has looked sluggish on the ball. To add to his woes, Julian Alvarez has provided instant impact off the bench twice (Liverpool and Crystal Palace) and Guardiola could consider him as well. Mahrez, however, is arguably City’s most clinical attacker in the wide areas and Pep unquestionably views him an enormous asset.

Cole Palmer is another option that the manager can rely upon. He was impressive in the friendly against Barcelona and can either slot in as a winger or a central midfielder. While it is true that Man City’s depth looks weak compared to the previous years, the options in wide areas remain stacked despite the departures of Sterling and Jesus. So, it will be interesting to see how Pep rotates his players as the games are arriving thick and fast. 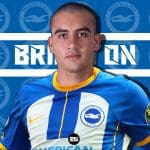 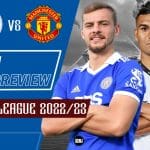