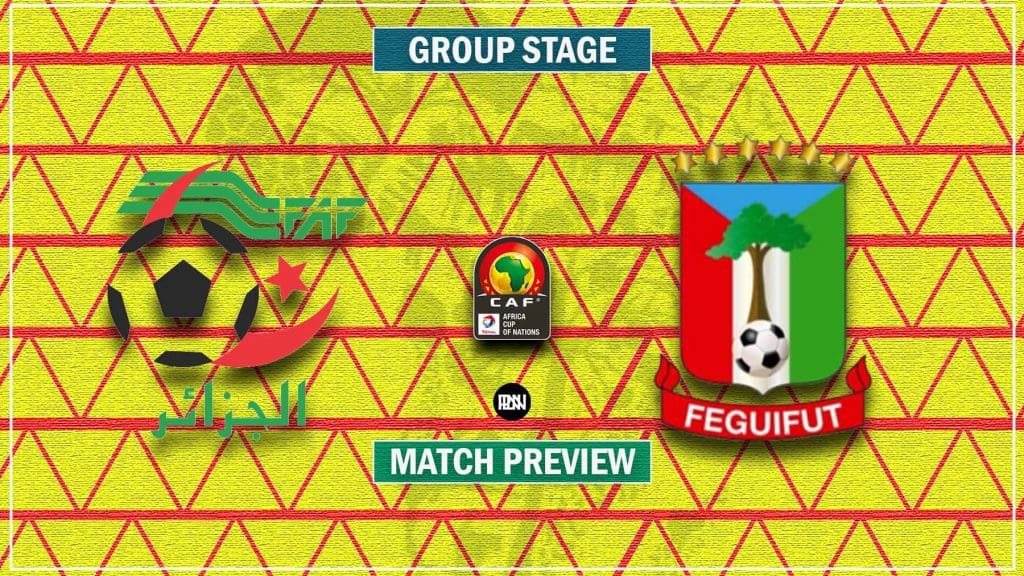 After that disappointing game against a less fancied, Sierra Leonean side, Algeria comes up against Equatorial Guinea for their second round of matches in the group stage.

Equatorial Guinea also lost to Ivory Coast by a lone goal scored by Max Gradel very early in the game. Max Gradel’s 5th-minute opener is the fastest goal so far in the competition.

Thus, both teams come into this game without a win. A win will increase the chances of both teams towards securing qualification to the knockout stages. This match is a chance for the Algerians to get back to winning ways after being given a reality check by 108th ranked Sierra Leone earlier in the First Round of Matches.

Algeria huffed and puffed looking at a momentary lapse of concentration from the Sierra Leoneans but were left disappointed at the end of the game. The Desert Foxes created few chances and were wasteful even with the few chances they created. Bounedjah, Benrahma and Mahrez were the culprits. Algeria are on a quest to become the 4th nation after Egypt, Ghana and Cameroon to win the AFCON title back to back.

For Equatorial Guinea, this is their 3rd AFCON appearance and their 1st without being hosts. They will be seeking to equal their Quarter-final appearance at the 2015 AFCON.

Youcef Belaili took a knock in the first half of the game against Sierra Leone and was therefore sluggish and lethargic.

Record goalscorer for Algeria, Islam Slimani really offered nothing to the Desert Foxes against Sierra Leone and will be replaced in the starting lineup by Baghdad Bounedjah.

Even though they lost their opening game, the Equatorial Guinea team gave a good account of themselves and are expected to lineup in the 4-3-3 formation. They have a lot of quick players in attack who also have great shooting abilities and can wreak havoc from long range as they will be offered very limited spaces against Algeria.

The team’s weak spot is in defence as displayed against the Ivory Coast where they succumbed to incessant attacks from their Ivorian opponents. Coach Djamel Belmadi is obviously disappointed with the lacklustre performance of his team in general and how blunt his attack was.

The Desert Foxes will be alternating between the 4-3-3 and the 4-1-4-1 formation with Haris Belkebla acting as the anchorman. In a 4-3-3 formation, the Algerian front three consisting of Mahrez, Bounedjah and Benrahma will be very pacy and will maraud the defence of the National Thunder. Abdelkader Bedrane, centre-back for the Desert Foxes was also very poor, making several defensive errors in the Sierra Leone game and was hauled off.

He should be replaced by the experienced Djamel Benlamri. Bounedjah is expected to start over Islam Slimani.

The Manchester City forward was spiritless, and passive in the Sierra Leone game. He was man-marked throughout the game and offered next to nothing to the Desert Foxes. He will need to go the extra mile to be the creative spark in the team so as to make the work of Baghdad Bounedjah very easy.

West Ham forward, Benrahrima was brought with about a quarter of an hour left to play and missed a glorious opportunity to give the defending champions the lead. He made all the needed runs and was always in the right positions to wreak havoc to the opponents. He has been rewarded a starting berth against Equatorial Guinea.