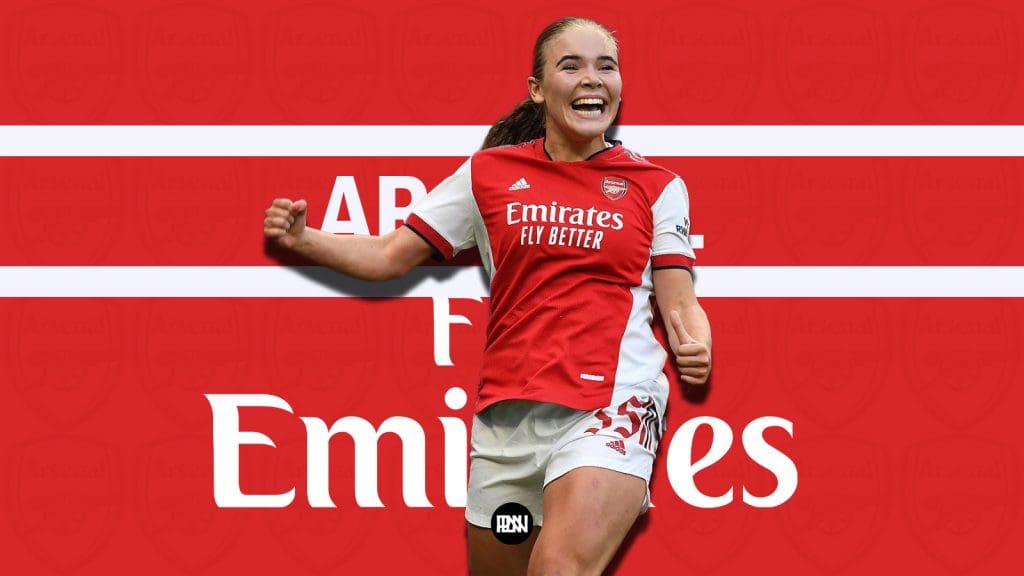 You might not have heard of Alex Hennessy yet, but you will come to know her in the next few years. The 16-year-old has already scored a brace in the North London Derby and has spoken about wanting to play at the top level of English football, the Women’s Super League. However, she understands the hard work she has to put in to reach a level as high as that.

Arsenal have started to nurture academy talent in recent years, with the likes of Lotte Wubben-Moy, Anna Patten, and Leah Williamson all being in the first team and all came through Arsenal’s brilliant academy and are now all-stars playing at the highest possible level, something that Hennessy will want to emulate.

However, Arsenal will try to make sure that no other WSL teams attempt to take her away from Meadow Park. This happened most famously with former Arsenal prodigy Ruby Mace, who left for Manchester City, likely due to a lack of first-team game time. But she’s found out the hard way that the grass isn’t always greener, as she still hasn’t made her Man City debut, despite the Citizens being riddled with an injury crisis which has hit them particularly hard in defence, which is where Ruby specialises. This had led many to think that Ruby could go on loan or even quit the club as early as January. And the story of Ruby Mace will definitely be something that Alex Hennessy would want to shy away from.

But this is probably the worst time to be coming through Arsenal’s ranks because, with the sheer amount of players the Gunners have brought in, most of the positions are already overstocked, and that will definitely stop the likes of herself getting game time, which is already limited for seasoned players such as Lisa Evans and Viktoria Schnaderbeck.

So, we’ve established that Alex Hennessy broke onto the scene with a brace against Spurs in the Mind Series NLD over the summer. We’ve also spoken about her dreams and aspirations, but also about how hard she’ll have to work to get there. But, there’s one thing left. Where did Alex Hennessy actually come from?

THE ONLY GIRL ON A BOYS TEAM

Due to a lack of funding for girls’ grassroots football, after falling in love with the beautiful game, Alex had to settle with joining a boy’s team. When looking back at how she started playing football, she said, “I was on a big family holiday and we were all playing football with other people staying at the resort. I just really liked it and when we got back my mum looked for a local team. I ended up in a boys team and being the only girl, but I didn’t see that as much of a problem to be honest”.

Alex grew up loving all sports, but she says that Jordan Nobbs and Paul Scholes are two of her heroes. Alex would have been around 13 when Jordan Nobbs scored 9 goals in 8 matches, and with Jordan wrapping up 3 assists, the then 25-year-old was at the top of her game. However, there’s a big similarity between Jordan Nobbs and Paul Scholes; they’re both brilliant passers of the ball. And I think that’s why Alex chose to become a midfielder, despite many saying she would be better on the wing or even up top. She summed it up better than I could, saying in a SportsAid interview, “Jordan Nobbs and Paul Scholes are two of my heroes, but I love watching any sport. The things you need for different sports is interesting – you have different goals, but the core values all stay the same”.

Due to Hennessy’s young age and also the lack of coverage for the academy leagues (which is something I’ll dive deeper into in a future article), you can’t really find much information about her career apart from one or a couple of interviews. But she is a Gooner, so signing for the club of her dreams must have been a terrific experience. Alex has gone from playing with a group of boys to show her prowess in the Arsenal and England youth ranks, captaining her country, scoring a brace against the club’s most bitter rivals at the Emirates Stadium, and has also won the FA Youth Cup. But somehow, her ambitions still go far beyond her current achievements. And while she pushes herself to realise her goal of making it as a professional, among Alex’s greatest hopes is to score a goal for her beloved Arsenal in front of a capacity crowd.

There is something really lovely when a youngster comes into the team, especially an attacking one, and shows passion and isn’t scared to drive at players and also into space. A great example of this is from the men’s side, with a certain player called Emile Smith-Rowe. Alex’s role models are all midfielders, but as I alluded to earlier, I don’t think she’s one. Alex Hennessy has already scored 3 goals in 5 games, which shows her prolific scoring. However, if you look at her goals, especially the goals against Spurs. For her first goal, Hennessy followed the ball into the box and headed it in at the back post from a cross. Not your typical goal for a midfielder huh? Her second was also a back-post tap-in, with the commentator calling it a “poachers instinct”. Now, the way I saw those goals, they remind me of a certain Vivianne Miedema. Now, I’m not suggesting she’ll be like her or something, of course not, I’m just saying that those goals remind me of Viv, and the fact that Viv can also link up with her teammates is a brilliant example of why I’m skeptical of Hennessy specialising as a midfielder in the future.

Hennessy can play as a central midfielder, attacking midfielder, and upfront (however only plays the role sporadically) but given her abilities, I think she would suit playing as a second striker, something which she hasn’t had the opportunity to practice, due to the role’s lack of notoriety in tactical systems. However, that role makes a lot of sense, as it would combine her attacking instincts and her midfield brilliance.

WHAT NEXT FOR ALEX HENNESSY?

The England U19 international will be turning 17 on the 23rd and she should be wanting regular game time soon. She is one of the outstanding youngsters everybody is watching and Championship and FAWNL clubs should be attempting a move for the youngster. But with the recent loss of Ruby Mace, Arsenal should probably attempt to sign the budding midfielder to a contract soon, or they could be receiving more compensation fees from other top clubs-.

From Alex’s perspective, she should want to join a club on loan which attacks and is fearless, so she can come back to Arsenal with a spirit that matches the club’s. An example of this (especially if they get promoted) is Hashtag United. The Tags are obviously famous due to their YouTube channel, and also Alex Bailess’ vlogs. The team formerly known as AFC Basildon scores a lot, and all three parties would benefit from the deal. Hashtag United gets a great player, who also has popularity outside of the club, Alex Hennessy gets quality game time in a third-tier team, and Arsenal gets back a quality player who’s a year older with first-team experience. Triple win.

Alex deserves everything that’s happened to her, and hopefully, the 16-year-old becomes a gem for Arsenal and England in the next few years. Alex Hennessy is a great footballer, with character, passion, and charisma, and Arsenal are lucky to have her but need to start showing that they care very soon, or she could leave for good.

Why has Nikita Parris not started well at Arsenal?
Meet Claudia, the beautiful wag of Aston Villa star Emi Buendia
To Top