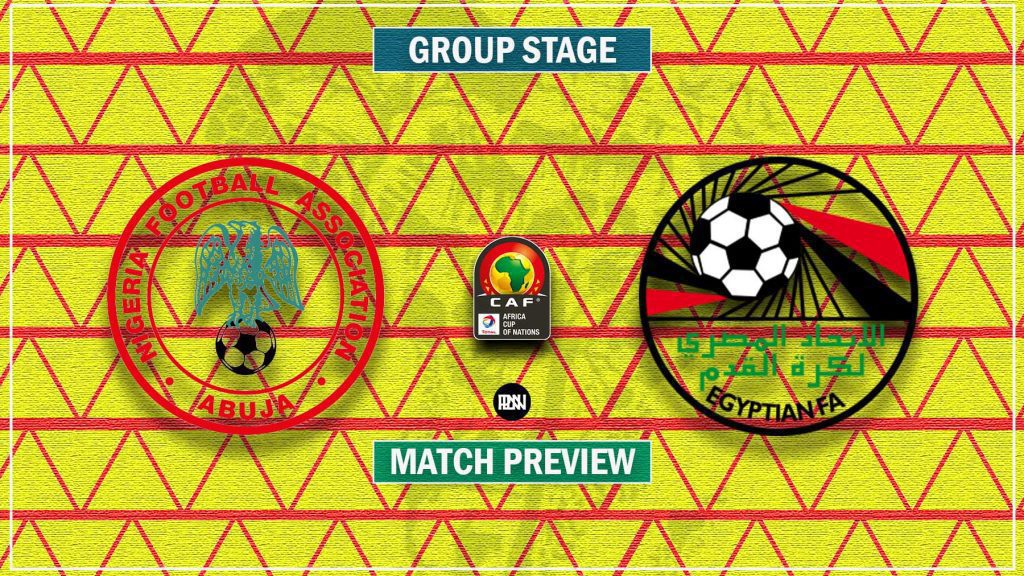 Probably the biggest and most anticipated game in the first round of group games, Group D presents its opening game where two African heavyweights in the Super Eagles of Nigeria and the Pharaohs of Egypt confront each other.

To see who comes out on top and who increases their chances of winning the group, Premier League News Now brings you an in-depth analysis of the game, predicted lineups and all you need to know ahead of this great fixture. The game presents stars and quality in all aspects. Record winners Egypt take on three-time winners Nigeria. A super clash of a fixture.

The rivalry between the two sides dates as far back as 1960 when Nigeria secured a 2-1 friendly victory in their first encounter, and while the Super Eagles will be seeking their fourth title, the Pharos will look to conquer the continent for the eighth time.

In defence, we could see Porto full-back Zaidu Sanusi and 25-year-old Olaoluwa Aina, who turns out for Torino, play on either side of a centre-back pairing of William Troost-Ekong and Kenneth Omeruo.

Notable absentees in the Super Eagles include Victor Osimhen, who was the nation’s top scorer in the qualifiers with five goals, after the Napoli talisman tested positive for COVID 19. Nigeria will also have to make do without the services of strike partners Emmanuel Dennis and Odion Ighalo, who were held back by Watford and Saudi Arabia’s Al Shabab FC respectively, with Peter Olayinka and Cyriel Dessers coming in as replacements.

As for Egypt, fresh reports have emerged of multiple COVID-19 cases with the trio of Mohamed Abogabal, Ibrahim Adel and coaching staff Essam El-Hadary testing positive for the virus. 24-year-old Marwan Daoud has earned a late call-up to the Pharaohs’ squad, replacing Pyramids defender Mohamed Hamdi, who sustained an injury on Friday.

Premier League top-scorer Mohamed Salah leads the Egyptian attack as he looks forward to making his mark in this tournament.

Nigeria will approach this game without Emmanuel Dennis and Victor Osimhen – two great attackers in their respective clubs. The three-time champions, who will be making their 19th AFCON appearance this month, enjoyed an unbeaten qualifying journey where they finished at the summit of Group L to secure smooth entry into the group stages of the tournament. Nigeria head into Tuesday’s game unbeaten in all but one of their last six competitive games, picking up four wins and one draw to book a spot in the playoffs of the 2022 World Cup qualifiers after finishing first in Group C, two points ahead of second-placed Cape Verde. The Super Eagles, who finished third at the 2019 edition are making their 19th appearance in the finals, and they would be eyeing a fourth crown.

In every aspect of the game, they have quality. From goalkeeping to attack. Zaidi Sanusi who has been impressive for Porto in Portugal over the past two seasons will be absolutely vital in defence for the Super Eagles. Frank Oyenka and Wilfred Ndidi who both play in the English Premier League for Brentford and Leicester City respectively will look to control the game from midfield against a very quick and tactical Egypt side. Captain Ahmed Musa will most likely lead the attack with Kelechi Iheanacho and Alex Iwobi of Everton. A game to truly look forward to.

One of the favourites coming into this competition, Egypt come into this game with a young side under former Manchester United assistant coach Carlos Queiroz. For the Pharaohs, their last outing was disastrous as they failed to get past the Round of 16 against South Africa. They hold arguably the best player in the world as their skipper in Mohammed Salah and will be looking forward to urging past Nigeria on Tuesday.

Their use of the width of the pitch will be vital to their performance and result in their opening game against the Super Eagles due to the essential presence of Mahmoud Hassan Trezeguet of Aston Villa and Salah of Liverpool. Wide players who can create chances and score goals on their own.

Salah is the one to watch ahead of this cracker of a game. The Egyptian king had scored 16 goals and assisted 7 times in the Premier League before moving to join Egypt in the tournament. In the form of his life, Salah arrives into the 33rd edition of the Afcon looking like the man to lead Egypt to their eighth trophy. The Nigeria team will try to keep him off the ball as frequent as they can should they stand a chance at winning this game. Salah’s pace and accuracy in front of goal have been obvious this season for all and he will look to continue at this edition of the Africa Cup of Nations. A top scorer and player of the tournament contender, the man to keep a close eye on.