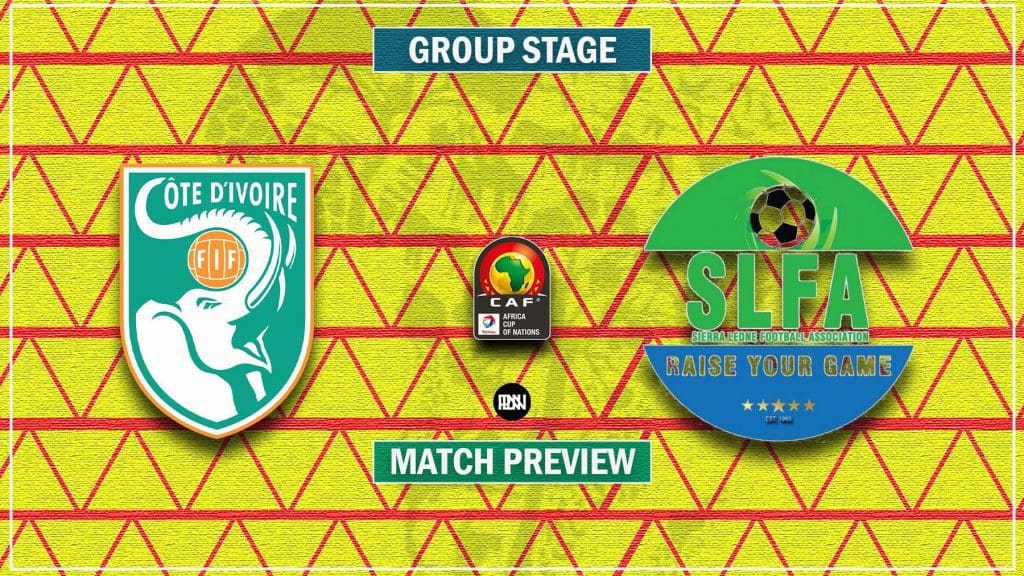 The second round of matches for the group stage of the 2021 Africa Cup of Nation is underway and it is the turn of Group E. Group E leaders, Ivory Coast battle Sierra Leone at 4 pm on Sunday 16th January at the Douala Stadium.

Sierra Leone has warmed the hearts of every footie fanatic after that resilient performance against the defending champions, Algeria. The Leone Stars who were not given a dog’s chance held the Desert Foxes to a goalless draw in their 1st AFCON appearance since 1996.

Goalkeeper Mohammed Kamara pulled off some superb saves and overall fantastic performance to earn a crucial point for the Leone Stars in the first game of their third appearance at the African championship. Mohammed Kamara who hitherto has less than 10 caps for his country made 7 crucial saves to prevent a very talented with a star-studded attack with the likes of Riyad Mahrez, Islam Slimani and Baghdad Bounedjah. Stephen Caulker and Umaru Bangura formed a superb partnership at the back for the Leone Stars as they made light work of Islam Slimani, Baghdad Bounedjah, Youcef Belaili and Riyadh Mahrez.

For the Elephants, what was more important was the fact that they started on a high note. However, the striker for the game, Sebastien Haller was a pedestrian in the game as a result of the playing style of the wingers; Maxwell Cornet and Max Gradel. Cornet and Gradel were aiming to score themselves and were not flipping in the crosses for Haller as he would have expected from his Ajax teammates Dusan Tadic and Anthony.

The Ivory Coast go into this game at the top of the summit of the Group E table with 3 points, followed by Algeria and Sierra Leone both tied on 1 point and Equatorial Guinea who do not have a point.

The last time both teams met was in 2015, an AFCON qualifier which ended in a goalless draw.

Ivory Coast and Sierra Leone have met 7 times, with the Elephants winning 6 times and drawing once.

Sierra Leone’s goalkeeper, Mohammed Kamara, Steven Caulker and Umaru Bangura will need to bring their “A” game. This is the 3rd AFCO appearance for the Leone Stars and they have not gone past the group stage on their past 2 AFCON outings.

A win against Ivory Coast may well make that dream a reality.

The Crystal Palace forward came on in the 71st minute replacing Burnley’s Maxwell Cornet and was a breath of fresh air in the team. He dazzled the crowd with his wonderful footwork and dribbling and narrowly missed 2 shots from hitting the back of the net. He is expected to play ahead of Max Gradel in the game against Sierra Leone.

The Arsenal outcast also came on in the 72nd minute and missed 2 clear goalscoring chances. Had he capitalised on both chances, he could have made a case for himself to have a starting berth in the team against Sierra Leone. The competition among the wingers is very tight as there a plethora of players to choose from. Therefore Pépé should start on the bench for the next game.

Bailly was superb for the Ivorian team in defence using his body as a shield on several occasions even at a point risking injury. His partnership was Simon Deli was not bad on the day. They managed to hold on the opposition really well.

The Burnley winger had a lot of the ball and tried to go solo and score but was crowded on several occasions and lost the ball. He did not give off a superb output; it was an “okay” performance. He will need to sit up and be more interested in teamwork in the game against Sierra Leone.