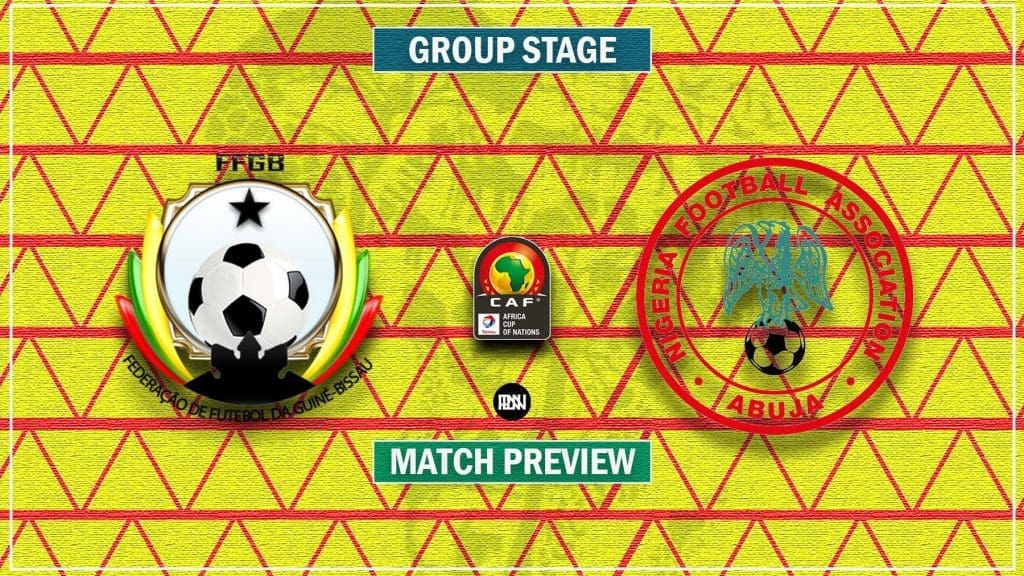 The final group games in group D come off on Wednesday day night and Premier league news now brings you all you need to know ahead of this cracker of a fixture.

Nigeria look to remain on top of their group when they face Guinea Bissau who were absolutely impressive against Egypt. A must win game for the Djurtus who have only a point from their first two games and risk elimination from the competition.

Guinea-Bissau will be boosted by the return of Jonas Mendes and Jorginho, who were in action against Egypt last time out after missing the opening game against Sudan through COVID-19. However, goalkeeper Maurice Gomis and 30-year-old forward Joseph Mendes will be absent in Wednesday’s game as they are in isolation after recently testing positive for COVID 19.

For Nigeria, considering their qualification already into the knockout stages of the tournament, some keys players in Wilfred Ndidi and Moses Simon could be given a rest. Huesca Midfielder Kelechi Nwakali could feature from the start after coming off the bench in the first two games of the tournament to reinforce and stabilize possession in midfield.

Captain Ahmed Musa could feature from the start this time after coming off the bench against the secretary birds in the 65th minute.

Guinea-Bissau suffered a huge blow to their chances of reaching the round of 16 after a 1-0 loss against Egypt last Saturday which had their late equalizer ruled out by VAR due to a foul in the build to the goal on the left-wing of the Djurtus attack. A must-win game against the Pharaohs of Egypt and a chance to make their mark on the continent.

Moreto Cassama has been impressive for the Djurtus. The Djurtus had 7 attempts on goal with three on target against Egypt. Not many attempts on goal and not many chances created. The North Africans held possession for the most part of the game and that will have to change against the Super Eagles if they want to test Okoye and if they want to earn a spot in the next round of the competition.

Nigeria head into Wednesday’s game unbeaten in each of their last five games across all competitions, picking up four wins and one draw. It is safe to say that Nigeria have been brilliant and are considered the team to beat in this year’s edition of the African Cup of Nations.

Samuel Chukwueze opened the scoring for them against Sudan with Taiwo Awoyini and Moses Simon also finding the back of the net.

The super eagles have six points in their first two games and have already advanced to the knock out stages of the competition.

A major rest for some starters is not to be discarded and Samuel Chukueze and Leicester City forward Kelechi Iheanacho will look to continue their goal-scoring prowess.

After his half volley against Egypt, The Leicester forward failed to find the back of the net against Sudan for the Super eagles but will look to get back on the score sheet when Nigeria face Guinea Bissau on Wednesday Night. The Leicester city forward who had four assists and two goals in the premier league before joining the Nigerian camp to this Afcon looks like a very trusted Center forward by Augustine Eguavoen. Iheanacho is definitely one to watch in this fixture.

After coming off the bench in the past two games for Nigeria, the Everton forward will look to have minutes in this game and make his mark in this prestigious African tournament. A goal and an assist only for the Everton man in the premier league this season and moving into this competition in a well-drilled Nigerian squad, Iwobi will be looking to find a good form and make his mark on the competition.