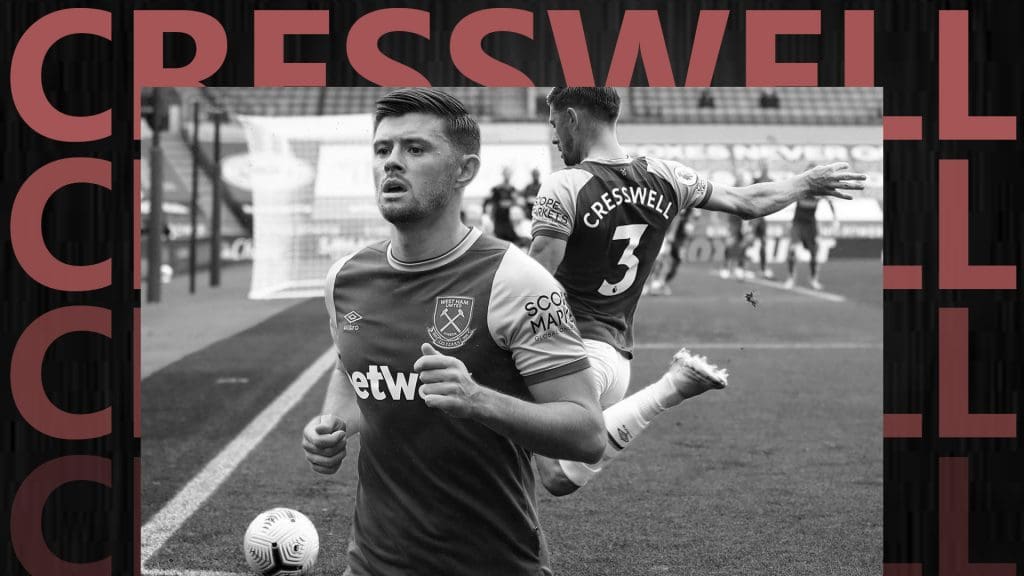 At the start of the season, if you asked anybody what their Premier League Top 4 would look like, not even the optimistic Hammer’s fan could predict that they would be this far up in the table above the likes of Tottenham, Arsenal, Liverpool & Chelsea. This tells you the unpredictable nature of the Premier League and how big an achievement it is for the Hammers to be in this position after 25 Premier League games.

HOW CRESSWELL HAS BECOME CRUCIAL FOR THIS WEST HAM TEAM:

Aaron Cresswell has been West Ham’s chief creator this season, with the left-back providing 6 assists this campaign, one more than Andrew Robertson, who was named left back of the season last year. It can be argued that Liverpool are having a mid-season crisis but this does not take away from Cresswell’s achievements, who has been unbelievably consistent this season as he has played all of West Ham’s 25 games in the Premier League and has time and again proven to be a threat with his inventive crossing.

Cresswell has always been a good crosser of the ball, but in this West Ham team, his crossing ability is more crucial than ever with players like Tomas Soucek & Michail Antonio benefitting largely out of this due to their strong aerial presence. It could also be said that Cresswell would be further up in the assists charts if Sebastien Haller(West Ham’s biggest signing in 2019 who recently joined Ajax in January 2021) would have been a little more potent in front of goal, with Cresswell creating a lot of good chances for the French forward, especially in the 2020/21 season.

Cresswell is also West Ham’s corner kick taker from the left-hand side as the Englishman can deliver deadly balls into the box which is just a gift for West Ham’s humongous backline which boasts the likes of Issa Diop and Angelo Ogbonna, both being 6’4 inches and aggressive in the air. When you have so many players in your team who are so adept at heading a ball in the air, Cresswell is almost an un-droppable player in this West Ham team.

HE HAS THE STATS TO BACK IT UP

However, a defender’s primary responsibility is always manning the backline and Cresswell has certainly done so by helping his team keep 9 clean sheets this season, joint 4th highest in the Premier League. Cresswell has also had an incredible 79% pass completion this season, and that is quite an accomplishment because for any team that is outside the traditional top 6′ it is very hard to hold on to the ball and knit passes together. Moreover, the 31-year-old Englishman has had the most touches of any West Ham player this season which tells you how important the left-back is to the team’s game plan.

The most impressive record apart from the Englishman’s assist tally is the fact that he has received only one yellow card this season which is impeccable for a left-back, more so because West Ham’s average possession has been 44%, which means that the Hammers have more often than not, been defending up against teams.

West Ham United’s latest addition, Jesse Lingard has formed up quite a partnership with Cresswell already, with the left-back always wanting to make overlapping which is creating increased space for Lingard on the ball which has been one of the reasons for Lingard’s recent boost in form.

Cresswell has certainly been one of the best left-backs this season if not the best, and the Englishman will be hoping to carry this form towards the back-end of the season and with Ben Chilwell not playing regularly for Chelsea, England could call up Cresswell for the Euros in the summer.