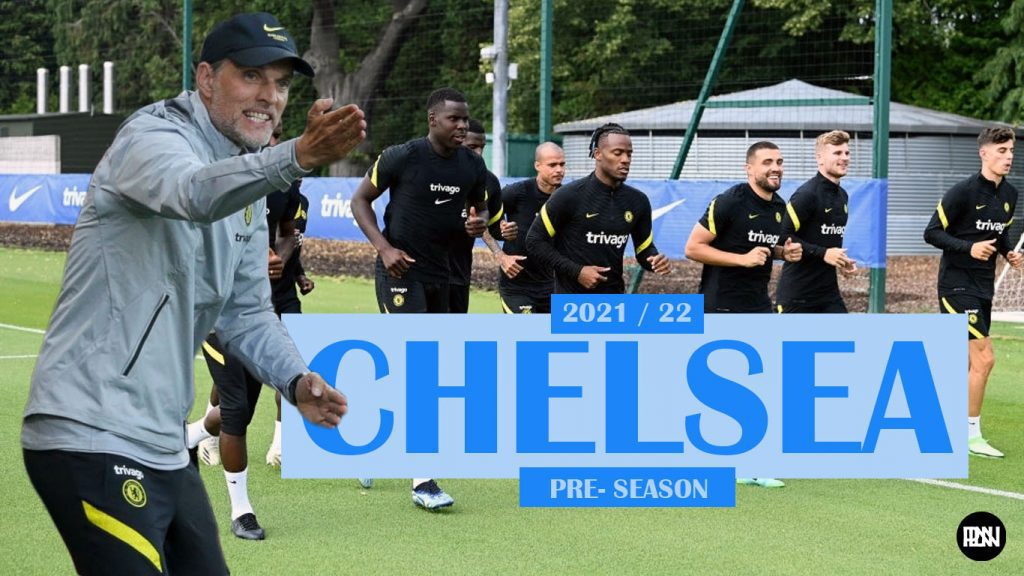 A new season and a fresh beginning for the Champions of Europe has begun! Chelsea are back in the training ground with greater intensity and with a bigger vision for the upcoming season. The atmosphere looks very light in the camp, but for few players, it is a moment where they can either make or break their careers.

Out of the big bunch at the Cobham right now, many are eying for a spot in Tuchel’s first team and thus the pre-season for them becomes much more important. Here we try to get into the minds of a few of these players who really have a chance to make it big this season.

Answering to the first question about the English International, Thomas Tuchel compared the 25-year-old to Michael Ballack during his pre-match conference before Chelsea’s match against Fulham the last season. Since that day, Chelsea fans knew that Loftus-Cheek under Tuchel might revive his career at Stamford Bridge.

Claiming a spot in every Chelsea fan’s heart, Ruben Loftus-Cheek was Chelsea’s best player, only second to Eden Hazard, during the Blues’ 2018-19 Europa League winning season. But the cruel injury to his ankle just left him out for a big part of the following season. Even after his recovery, he was never seen in the same flow in the Chelsea colors and also did not have a season to cherish at Fulham on loan. But the recent reports around Cobham suggest that Thomas Tuchel is very impressed by Ruben and the Englishman has been one of the most impressive players in all the drills. This definitely increases the chance of him making a cut-through in the first team at Chelsea.

Chelsea last season lacked out-field goal contributions from their midfield and with Ruben, Thomas Tuchel might just tick the box. Chelsea critics always criticized Chelsea’s ability to take shots from outside the box and Ruben Loftus-Cheek could just be the solution to it as well, as his average distance for all goals scored is more than 15 yards considering the fact that he goes for headers inside the box as well. And his curler outside the box in the Europa League is just what can’t get off the minds of every Chelsea fan!

But do Chelsea have a vacancy for him? Yes, they do! In the current set-up Chelsea do not have a direct back-up for Mason Mount as Kai Havertz is a player to play a bit more forward. And with Ziyech, Pulisic and Hudson-Odoi better on the flanks, one man Tuchel can rely to come on as substitute in latter half of second half and play as a second striker can be Ruben Loftus-Cheek.

Chelsea and the Declan Rice saga is just a story of forever! Also, with Chelsea’s keen approach to land a world-class striker and a big-name center-back, probably Kounde, they might not go and meet West Ham’s £100M demands in this window. So, with Gilmour out on loan, do Chelsea have a back-up to play in the midfield? One man certainly who can get benefitted from the situation is Conor Gallagher.

After being coveted as Academy’s Best Player in 2019, Gallagher has impressed everyone over different tiers of English Football during different loan spells. Last season, he looked one of the best players, if not the best, for West Brom Albion who were constantly fighting in the relegation zone. A perfect box-to-box midfielder, as he describes his role, he is very organized defensively and has the ability to take the ball in the opposition half and cause damage as well.

With many teams in the Premier League interested for a loan move, it looks likely that we might see him spend another year on loan, but he definitely has to make his presence felt in the pre-season to make a claim for a spot in the future and who knows might for a spot this season as well.

Might be the most unknown name on the list but certainly the name very high on Tuchel’s appreciation list. The youngster, though very versatile, has adapted a role as a right sided defender and has recently played as a wing back under Tuchel in training. The 6ft 1inch tall man is very well built physically and has been able to put in strong challenges even after a season long injury.

The Chelsea graduate did break in the scenario under Antonio Conte but the injury ruled him out for long. He made his comeback 6 months back and now looks one of best players in the training. Chelsea and Tuchel were eager for a player to cover Reece James and Azpilicueta, and thus were interested in Hakimi and Traore. But a move for none of them going par the line, they still have a spot that Sterling can hopefully wish for. Attacking output of Hakimi and the strength and pace of Sterling does make him a very good contender to claim a stake but lack of experience could definitely be the roadblock.

Dujon has recently been very solid as a right sided center back in a back three and as a wing back in different pre-season games. He has the sight to be at the right place to make timely blocks and also has enough fuel to inject a speedy run and convert defense into attack. In his early days at Chelsea academy, he even has played as a striker and thus could be a super-sub to bring on and change things massively!

One name who no one would have expected on this list is Chelsea’s biggest signing, Kepa Arrizabalaga! The Spanish International has been under a lot of criticism for long and many expected him to leave this summer. But this looks very unlikely that any team right now will pay anything around the price Chelsea bought him for. And with no loan move upcoming, the Spaniard will most likely stay at Stamford Bridge for another season.

But what makes us give him a place in this list with Mendy performing exceptionally? Generally, a back-up keeper does not have a big enough role as other players on the bench. But this season, Mendy will be out for a considerable amount of time after the Christmas period as he has to represent his nation at the AFCON. The Senegal team will be in action in the African Cup of Nations which will extend for a month, starting in January. With the quarantine rules to be enforced, Mendy will be missed by Chelsea for a considerable chunk of time.

Thus, Kepa becomes the very first choice for a period when Chelsea faces the likes of Manchester City, Liverpool and Spurs and also the initial leg of Round of 16 in the Champions League. Under Tuchel, Kepa has shown a boost in confidence and this has been reflected in his performances with consecutive run of clean sheets. His recent interviews in Chelsea training do reflect the confidence of Tuchel and his management team on the Spanish shot-stopper.

Kepa really has a lot to prove and this season might be the one where he gets the opportunity where he will compete with new 3rd choice at Chelsea, most probably Marcus Bettinelli.

These few names do really have a lot more than just the pre-season period and no Chelsea follower right now can predict the future of these lot-to-prove players.

Transfer Breakdown: Why is Al Musrati an effective alternative for Joao Palhinha as a Ruben Neves replacement?
Joe Willock or Ross Barkley: Newcastle United should snap both of them
To Top